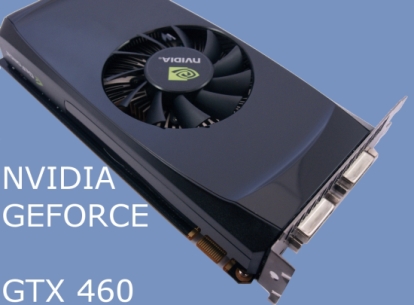 Over the last 12 months, nVidia have been all about one thing - delays. Month after month, I'm sure many of you had waited for the range topping GeForce GTX 470 and 480 graphics cards. Indeed, nVidia were late to the DirectX 11 party but today no one seems to care. The bottom line is that team green have taken back the performance crown and are succeeding in their catch up endeavours. Not so long ago, we also saw the release of nVidia's eyefinity competition, known as 3D Vision and Surround. Step by step, it may seem that light is at the end of the tunnel.

One slight problem though. Not everyone on the market today can afford to drop upwards of £300 on a new DX11 graphics card. With ATi enjoying healthy sales figures from Radeon HD 5670, 5750 and 5770 SKUs, it is about time that nVidia returned with some more competition. Today we are pleased to present to you exactly that; meet the nVidia GeForce GTX 460.

I have lied slightly, in that nVidia already have a "mid range" offering on the market today known as the GTX 465. As my colleague highlighted, the cut down GTX 470/480 graphics card suffered from all of the power and heat based issues of its larger siblings but without any of the performance that made them worthwhile. To make matters worse, it is priced well above the £200 mark, making it terrible value for money. Not good news at all.

This is where the GTX 460 comes into the picture. Like the observant chaps that nVidia are, they went away and reworked the GF100 architecture to offer a native mid range graphics card. That's right, no added baggage and no inflated price tags. I think we're all eager to see what it has to offer so let's jump straight to the specifications.

First of all, we would like to make it clear that there are two versions of the GTX 460. If you decide to save £30 and purchase the 768MB version, not only will you lose out on 256MB video memory, data will be transmitted via a slightly narrower memory interface. It remains to be seen if this causes significant harm to performance but it's safe to say that downgrades such as these are never good news.

Next, I would like to point out the specifications of the GTX 460 relative to the preceding GTX 465. Despite a £80 and £40 price difference, the GTX 460 has just 16 less stream processors but considerably higher memory, shader and core clocks. Is that value for money we smell? Let's find out.

Runebeard
Best thing I've seen NVidia do all year imo. If I were looking to upgrade whilst staying in the green camp, this is the obvious choice. Will you be getting in a 1GB version to test and compare as well?Quote

tinytomlogan
I would have thought we would yes matey, but Ive got nothing secured as we speak. Will deffo happen soon though.Quote

silenthill
Great review, well done Mul, great price too from CPL at scan and overclockers the cheapest is 152£ seams that nvidia have come up with actually something worth buying but ATI will definitely bring their prices down on certain cards to compete with this card so dont be hasty guys.Quote

Runebeard
Awesome dude! Thanks very much

thestepster
this is definitely of massive interest to me on both fronts (thanks to tom and mul for the [email protected] bit) does 10k overclocked on an OEM card im lookin at the asus with the volt mod for a bigger overclock and gettin 2 of them to run sli in games when i eventually turn off [email protected] for some gamin, another thing i was thinkin what was the power consumption of the cards when they were overclocked i was reading some pretty high numbers on other sites and it would definately need a new psu if its true

EDIT: there is 2 brands of this card i was reading on futuremark u might want to avoid the palit and gainward ones (palit owns gainward?) they are what seems to be strangly shipping without ANY VRM heatsinks?Quote
Reply