Graphics cards can be roughly divided into three camps. There are the cards for people who want something which can put an image on their monitor and little more. Anything capable of rendering a browser window, handling something like League of Legends or DOTA is more than enough. Then there are the cards which are for the gamers. With a whole host of capabilities and the broadest range of pricing, this is the meat of the market and the place where most of us make a compromise between what we want and what we can afford.

Then there are cards like the RTX 3090. This is the choice for those who cannot live with compromise. Those for whom 200 FPS isn't nearly enough. Those who wear Gieves and Hawkes, are chauffered around in a Mercedes S Class and think nothing of spending a months wage on something to make their games even spanglier.

If the RTX 3080 was a card which brought RTX 2080 Ti busting performance at RTX 2080 prices, then the RTX 3090 is a card which brings RTX Titan busting performance, at eye-watering prices. It makes the RTX 2080 Ti look affordable. As we said though, if you come into this card expecting value for money you're looking in the wrong place. It's twice the price of the RTX 3080, and unless Nvidia have found a hidden portal to the future there is no way it's gonna have twice the performance. The law of diminishing returns and all that.

So for the rest of this review, until the conclusion at least, we're gonna just accept that affordability isn't the MSI RTX 3090 Gaming X Trio's strong suit. Everything else is though.

Whenever there is a new product you can get a rough idea of where it sits in the market by seeing what the manufacturer is comparing it to. The RTX 3090 is compared to the RTX Titan, and that tells you all you need to know. If you like some raw numbers then how about this, the Titan had 4608 CUDA Cores compared to the 10496 here, 288 Texture Units vs 328 on the RTX 3090, and a massive boost to the memory clock speed has seen the bandwidth go up from 672 GB/s to a whopping 936 GB/s. This is one of those products which is so much of everything that numbers become meaningless.

Whilst we might all be interested in the gaming performance, the RTX 3090 is very much designed both for creators and for futureproofing things. The primary focus of a lot of the Nvidia literature is how the 24 GB of video memory will enable renderers to produce more frames faster than they would on lesser memory thanks to that enormous, fast, frame buffer. Similarly the Ampere GPU is aimed at 8K gaming or using DSR to crank titles to new heights of crisp gaming without compromising too much in performance terms. All things we'll be testing as we run through the benchmarks. Naturally our primary focus is upon the RTX 3090's utility as a purveyor of blinding frame rates in gaming titles rather than something which can render 3D scenes faster than before. Partly because we're a gaming site more than a creation site, and partly because - as anyone who has done 3D work knows - rendering requires an entire warehouse full of hardware to do at anything approaching sane rendering times. No single GPU will change that, no matter how much quicker than a RTX 2080 Ti it is.

MSI are keeping their clock speeds close to their chest in their specification table. Fortunately GPUz will reveal all their secrets, but for now we'll just make do with the knowledge that the Founders Edition Nvidia RTX 3090 is rated at 1695 MHz boost clock, so this should be ahead of that even before the GPU Boost technology does it's thing. 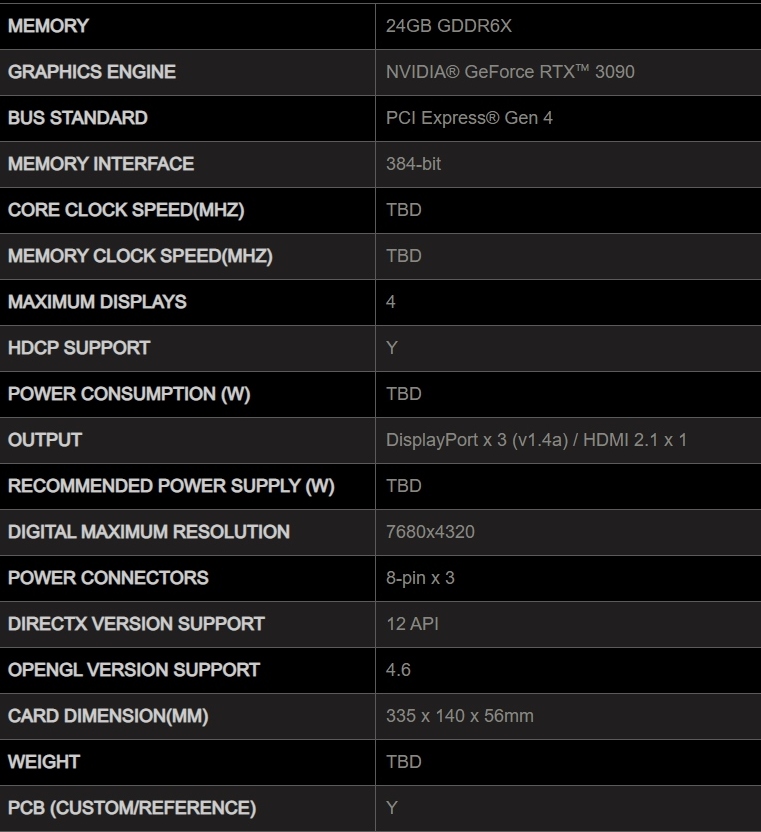 Warchild
Well that is me pulling out for the 3090 purchase. I truly hoped that the leaked benchmarks were pre alpha drivers etc. Its impressive numbers, but the jump over a 3080 is just too small.

But, yeah it saves me a ton of cash im not even sure I want to bother with a 3080. Maybe ill pick up another 2080ti gaming X for hopes that Cyberpunk 2077 will support SLI.. one can hopefully dream.

However a question for TTL.

There are reports from many users of frequent crashes during gaming on the 3080. Perhaps you can verify if you experience the same for either 3080 or 3090. Perhaps thats for WYP to look into testing?

So far there is no word from Nvidia, but it seems the internet is awash with similar complaints.Quote


I will be skipping this series unless I have to replace a card due to a failure.


It will be interesting to see the AMD Card's reviews now.Quote

With your analogy with cars what card does the ford cortina driver get?Quote

but for 20xx, im not so sure. It goes back to the usual skip every other generation way of upgrading. Who knows though, more products will come. Now ill happily wait for AMD Big NaaaVEEEEQuote
Reply