In our initial review of the R9 290 we felt that it had the potential to provide far better value for money than the 290X, with only the thermal limitations of the dodgy AMD cooler reducing its performance.

With the release of the MSI R9 290 Gaming we should see those limits removed. As well as being part of the outstanding MSI Gaming range, the R9 290 Gaming is also supplied with the MSI Twin Frozr cooler which should give us greater overclocking headroom to really bring the Radeon card up with the best of them.

So without further ado let us see if out early gut-feeling about the Hawaii GPUs potential is borne out now that we have a cooler worthy of the name.

There are three settings on the MSI Gaming. Usually the AMD cards have a Silent and Uber modes. The Gaming introduces an OC mode too, which boosts the Hawaii core past the 1GHz marker. Otherwise things are, specification wise at least, fairly standard for a R9 290. 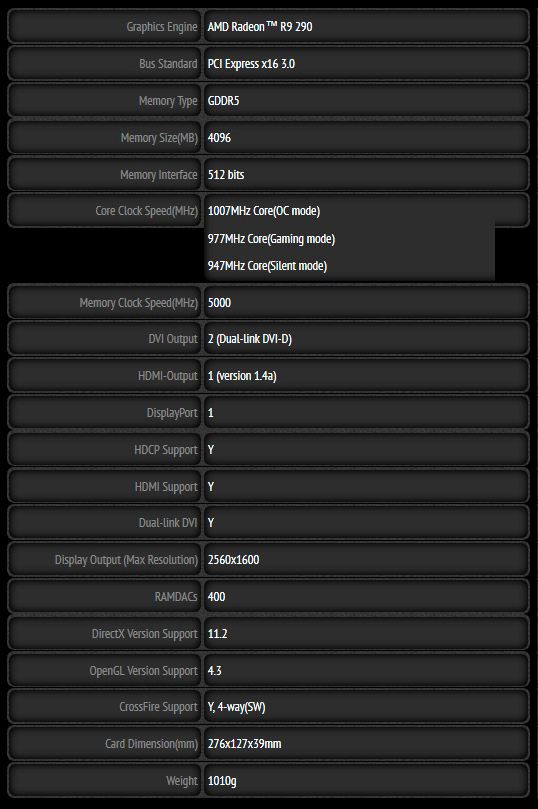 Excalabur50
Another quality review and what an amazing card for the price and to see the numbers jump with Mantle....just wow, going to be interesting to see how much further Mantle goes as the technology maturesQuote

mantle gave a good increase in performance there, especially given the CPU your using.
Only time will tell how much mantle will benefit gamers, lets hope Thief comes to market with full support for ALL GCN GPUs and works in Crossfire unlike BF4 at present.

One thing i will add here, the PCB on this MSI card is reference,so it is watercooling capable (checked by EK here), but also contains some of higher quality components compared to the reference card (MSI military class) and likely could be a higher binned chip.

Definitely worth considering for those water cooling or planning to watercool a 290, especially those who can't watercool immediately considering the stock card's noise levels and throttling. It also has a good looking backplate at stockQuote

Zoot
MSi have really upped their game with the Twin Frozr coolers.

My old MSi GTX 560 with the Twin Frozr II cooler, while being fine when it's idle sounds like an aeroplane while gaming.Quote

Scainer
Nice to see the overclock. Was just playing super safe with a 1047.Quote

AverageNinja
That's one sexy card! AMD is back in the high-end competition