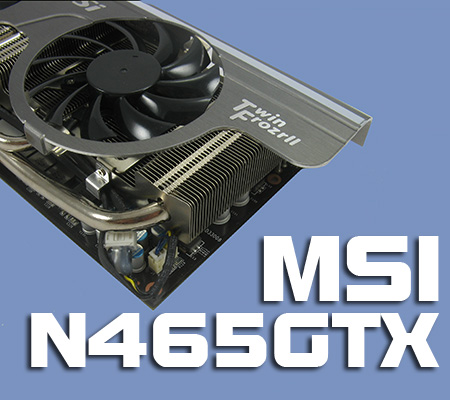 New technology. It's what we live for. The thing we love. No matter what field you're interested in the release of the next generation is always a mouth-watering prospect. From HDTV to SSDs our life is nearly always better for the addition of the latest thing.

This does however, as always, come with a price. The price of early adoption, which not only involves paying a literal higher price, but usually having a product that isn't quite as refined as it should be.

Such is the case with the 'Fermi', or GTX4xx, series of cards from nVidia. As always with nVidia product the performance is absolutely stunning. The big downfall, besides the price, is the woeful stock cooler. The GTX480 suffered fairly badly, but as the premium model there are always little niggles. The one we were all being really hopeful for was the middle model. The 470/465. After all if the cooler wasn't good enough for the big boy, then it should be excellent for the lower powered model.

Enter MSI. As regular readers will know MSI have a cooler they label the "Twin Frozr". This is a huge heat-pipe and twin 80mm fan beast that can cool almost anything. They've paired this up with the GTX465 to give us the N465GTX Twin Frozr II. A card that promises to finally deliver the potential of the Fermi core without the insane heat. Hopefully we might even get some overclocking out of it.

According to the MSI website the combination of their excellent Afterburner software and the Twin Frozr II cooler should enable 15% overclocking!! So amazing is the thought of this it definitely needs two exclamation marks.

Let's take a look at the Twin Frozr II.

alienware
Heavens to megatroid ! What a card !!

Amazing stuff by MSI there. This really is quite annoying though because Nvidia should be sorting the cooling out. I can not believe they recycled their 200 series coolers for Fermi. Who'd have thunk MSI could pull off something quite so miraculous with a cooler eh?

NVIDIA I HOPE YOU ARE WATCHING.

Edit. Again enormous thanks to VB for putting this one through the wringer.


Quote:
This time around I totally agree. It's gorgeous.Quote

silenthill
What a great card the performance level is similar to a 470 and the temp 72 c really nice so another fantastic design from MSI.

tinytomlogan
Even I had to double check and ask Veebs if it was correct, gobsmacked it came out that good tbh.Quote

lasher
Cripes .... once a price is released this will be seriously considered!

lets hope the MSI guys don't read this review and stick a hefty price on it.

oh btw when it goes back MSI have changed address to

Complex!
What an awesome card! Didn't see that one coming!Quote
Reply