Specialist versions of graphics cards have always been popular. If we only cared about the actual GPU then everyone would own a nVidia reference card, but the fact that reference cards make up perhaps 5% of graphics cards in systems shows that we want the combination of higher clock speeds and better cooling that only a third party card can bring.

When it comes to higher clock speeds and lower temperatures, few cards have matched up with the MSI Lightning range. The earliest Lightnings were simple clock tweaks on an otherwise stock Twin Frozr cooler, but their popularity quickly led to MSI making them easily recognisable by utilising a yellow colour scheme. Whether it was a flash on the shroud or an entire fan changed, if you love the colour of buttercups then the MSI Lightning was the only way to go.

As we know, modern hardware has eschewed the idea of a colour scheme and moved towards set neutral colours and variable RGB lighting. The Lightning is no exception as MSI have dispensed with any yellow colouring and aimed the GTX 1080 Ti Lightning squarely at the RGB fraternity.

Like many multi-BIOS cards the Lightning is equipped with various options, from Silent Mode through Gaming Mode to Lightning Mode. Obviously everyone will just stick the card in Lightning Mode and forget about it, otherwise why would you buy a card capable of such high clock speeds as this if you're not going to take advantage of them? The other element which is worth noting is the Lightning has three 8 pin PCIe power inputs to ensure that the card has the maximum amount of stable power input at all times.

Let's run through the other elements that make the Lightning special. 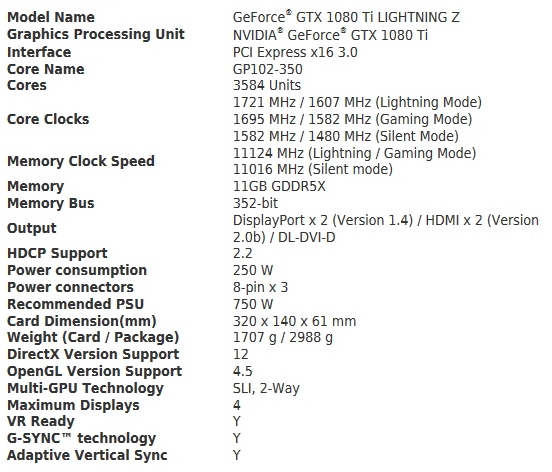 TheF34RChannel
Damn Tom you work quick! I hope you have a nice vacation upcoming!!Quote

tinytomlogan
Quote:
I was doing this and the VRM stuff for the Strix at the same time.... Its has been a busy few days for us all here though so TY xQuote

TheF34RChannel
Yeah I can only guess at the hours you lot are putting in.

I was wondering how you never seem to get sagging cards no matter the weight? Or am I that blind? Because the Ti, and especially the lightning, is heavy! The triple bracket may help with this particular model I suppose.Quote

AlienALX
Hurrah. Finally a Lightning card to make me drool as much as I did when the 480 Lightning came out.

Greenback
They certainly made a card that has all the I want one factors, Tom if you have to send it back could you accidentally put the wrong address I wont tell it arrived here