When it comes to hardware certain manufacturers have an element that is so engrained in their design ethos that it is almost impossible to think of them without it springing to mind.

So we think MSI cards, we think two fans. Which makes the Gaming X Trio a big departure from their regularly scheduled programming. Given that when we reviewed the GTX 1080 Ti Gaming X we found it to be both cool and quiet, it seems strange that MSI have felt the need to add another fan to the mix.

However, as always the true nature of a product never becomes clear from merely looking at it, but in the testing. Perhaps once we've got it pumping out polygons it will be more obvious as to why the Trio has grown another fan on its cooler.

The most obvious upgrade we can notice between the regular twin fan Gaming X and this Gaming X Trio is the OC mode clocks are a small notch above that of the original Gaming X. We know that core clock speeds are pretty meaningless though because nVidia's GPU Boost technology is so good at pushing the GPU even further depending upon thermal limitations, which might just give the edge to the theoretically better cooling from the Trio. Beyond that it's much larger than the Twin Frozr version, which is to be expected. Let's take a look. 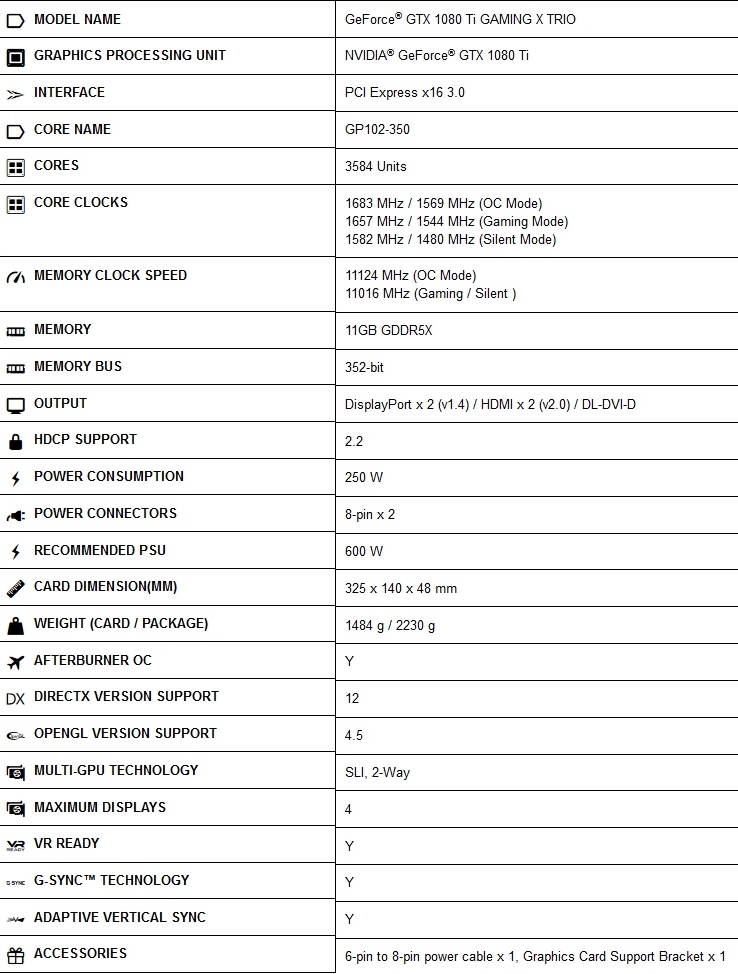 AlienALX
So the card sags and then the brace sags even more. lol.

great review as ever guys.Quote

realneil
I bought one of these and I love it. Saving for a second one now. I probably would have had it already, but someone offered me a great deal on a pair of Gigabyte GTX-1070Ti Gaming G1 cards and I jumped on both of them for 800 bucks. They come tomorrow.Quote

Warchild
All that good looking darkness and stealthy colours and then the Fan cables shine through in bright blue and yello >.<Quote
Reply