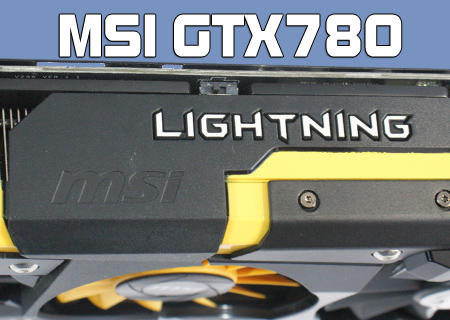 The GK110 GPU that's been demolishing benchmarks since it first appeared on the GTX Titan, and then beneath the hood of the incredible GTX780 is unquestionably an enormous performer. It's so good that at first glance the idea of overclocking it out the factory seems to be a strange one, given the amount of potential it has at stock.

However, if we've discovered one thing in our testing of factory overclocked GTX780s that the GK110 Kepler GPU responds massively to a boost in clock speed, so having the benefits of a 3rd party cooler alongside a factory overclock should be enough to tempt even the most fiscally prudent amongst you.

Just tweaking the clock speed would hardly be enough for MSI to give this particular card their Lightning moniker and fortunately there is a lot more beneath that yellow cooler.

There is a big increase on both the Core and Boost clocks, up from 863/900 to 980/1033. That should see a large performance improvement when compared to the standard cards, even with the memory remaining at 6008MHz effective.

MrKambo
wow this thing is amazing!

cant wait till someone has it under sub-zero i wanna see what this thing can do!

Mark3Max
Very cool , I've been waiting for your review on this card.

Edit : Thanks for the review Tom.Quote

murphy7801
If someone makes a nice water block for this very tempted (something like the xspc on).Quote

WillSK
Quote:
I'm pretty sure 8-Pack has already done so over the last couple of days, breaking the Firestrike record


Quote:
I think EK are making one at the moment so i'm sure wee'll see that soonish. Dunno about XSPCQuote

SieB
But can it run Crysis?

Will be interesting to see how many records this card will break over the next few days/weeks. Most likely all of them