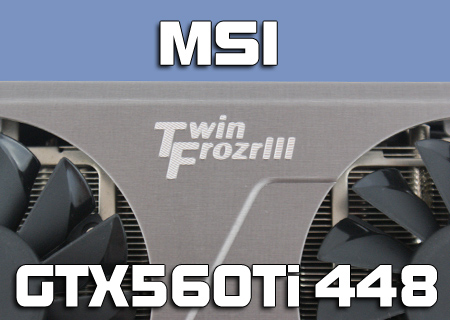 However there are a few key points that swing our choice of the two in favour of the MSI card.

Firstly the looks. The Gigabyte looks like a full-size cooler that has been bolted on to a much smaller PCB. The MSI on the other hand really gives off the aura that the Twin Frozr III cooler has been tailor made to fit perfect on the slightly larger PCB than the GTX560Ti.

Secondly is the cooling. With this MSI we've got a card that is clocked higher at default, clocked the same with our overclock, and has one less fan yet it's a whopping 11°C at stock, and 7°C when overclocked, cooler than the Gigabyte. Those are insane numbers. Not only is it much cooler, but it's quieter too and therefore much easier to live with on a daily basis.

Finally that little extra performance out of the box means the MSI is consistently topping the chart against its Gigabyte rival. Of course it's only by a smidgen here and there, although in some cases it's a little more than a smidgen, but if you're the kind of person who buys a card and just plugs it in, rather than risk your hard-earned with overclocking, then the MSI is clearly the better performing card.

When overclocking the results tend to be too close to call. There are gains and losses to be had from both cards, but none of them are particularly clear cut.

So, just like the Gigabyte, the MSI version of the GTX560Ti With 448 Cores is a card that answers a question nobody really asked, but still performs very well indeed. Although we're awarding it our OC3D Silver Award too, if it was our money on the table then we'd edge to the MSI for the extra performance from the mild factory overclock and those low low temperatures.

Since this review was first written the pricing information is now to hand and, rather than the £210 or so were expecting, the MSI GTX560Ti 448 is an eye-watering £250. This is far too expensive for what it delivers and into GTX570 territory. So if you're on a tight budget the GTX560Ti will serve you equally well and if you want the power the GTX570 is only a tiny bit more expensive. The MSI is still the pick of the two cards, but at these prices we'd buy neither.

Thanks to MSI for supplying the GTX560Ti 448 for review. Discuss in our forums.

silenthill
just buy a 570, please tell me what is Nvidia doing these days

yassarikhan786
Quote:
That question needs to be directed at MSI and Gigabyte

SieB
Quote:
Nvidia make the cards the different manufactures just buy them from Nvidia, slap an after market cooler on them and sometimes a custom PCB.

That question is definietly one for Nvidia.

. I just thought that the companies propose the ideas to Nvidia so they can make more money.Quote

Lollipop
Why even bother? I mean jsut buy a 570 and you still get better performance.Quote
Reply