Having recently looked at the ASUS Strix take on the amazing new Pascal GTX 1080, it's time to see what MSI bring to the table with their gaming edition.

The MSI Gaming range has always been a solid series of products, from their original motherboard all the way until now. The Dragon logo has become a watchword for their best products, overtaking even the Lightning and MPOWER ranges in the eyes of the masses. With the Twin Frozr VI cooler being updated to include TORX 2.0 fans, promising 22% better air-pressure than its contemporaries, and double ball bearings to ensure years of reliable service, all matched up to a power control system which keeps the fans idle in light use scenarios for silent gaming, the MSI Gaming GTX 1080 promises to deliver the same levels of excellence we've seen up to now.

It's not just the cooler that separates the MSI from its forebears either as, like nearly every product released in the last few months, the MSI GTX 1080 Gaming promises customisable LEDs allowing you to rock out in which ever colour you prefer, whilst the included MSI Afterburner tool makes overclocking your card a breeze. Other included software allows for control of your card via your smart phone, automatic overclocking modes, and even on-screen displays similar to those we find in Unigine, to keep a close eye on your clock speed and temperatures.

The main talking point with the new GTX 1080 Gaming is unquestionably the introduction of the Twin Frozr VI cooler. 20% cooler than the already outstanding Twin Frozr V, and promising a massive 40% reduction in noise. This is accomplished by keeping the fans off below 60°C so that the majority of browsing and light gaming use can be done in complete silence. The redesigned fans should also ensure that, even when they do spin up, they remain quiet under heavy loading. 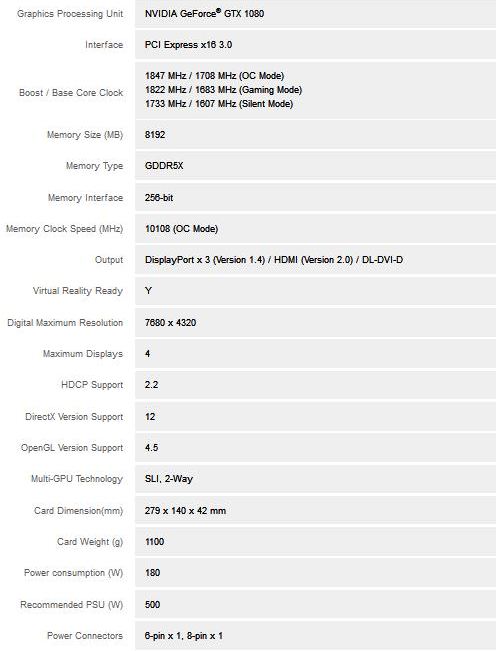 RickPlaysWarr
Nice Video Tom. I think I like this one better than the Strix which is a bit to long for my Caselabs X2M Case

BTW: On page three of the Review, I think the boilerplate for test rig needs to be changed to your current test rig.

Thanks again for another great review

I bought myself the EVGA GTX 1080 Founders Edition because I installed a EK-waterblock and EK backplate on it. While the waterblock is working fantastically, with load temperatures of 41°C max and idle under 30°C, I find it impossible to get with my card and my system (4930k @ 4.5 GHz, DDR3-2333 MHz) anywhere near to the results you had in Unigine of either the Asus Strix or this MSI Gaming. Unfortunately I lack some of the other software to compare more results.

I'm a bit surprised, because I focused on the overclocking and got my card to 2125 MHz stable, and 1338 MHz on the memory.

While the 2125 MHz is the max stable clock, my card is still over the 2000 MHz mark as most games confirm. Unfortunately it seems to be a bit under the 2000 MHz mark in Unigine Valley 1.0 most of the time. However, this is still beyond the frequencies of the Strix and the MSI Gaming.

I managed to get on 4k 62.1 FPS (no AA) and 32.9 FPS (x8 MSAA) average, which is substantially slower than the 71 FPS that the Strix and MSI Gaming produced. This puts the Strix and the MSI Gaming ahead of my setup by 13 and 6% respectively. I find it hard to imagine that the CPU or something else is causing this, especially at 4k.

In 3DMark FireStrike Ultra, my water cooled card is performing like it should and is slightly ahead of the Strix and the MSI Gaming, but I can't figure out why in Unigine Valley it underperforms this much...

The review is brilliant as always

Excalabur50
Yet another top review, I just wish MSI would do a carbon edition with no red accents and a bit of led so it's tasteful instead of tackyQuote

i don't even like the carbon that they have done to me that even looks tacky.Quote
Reply