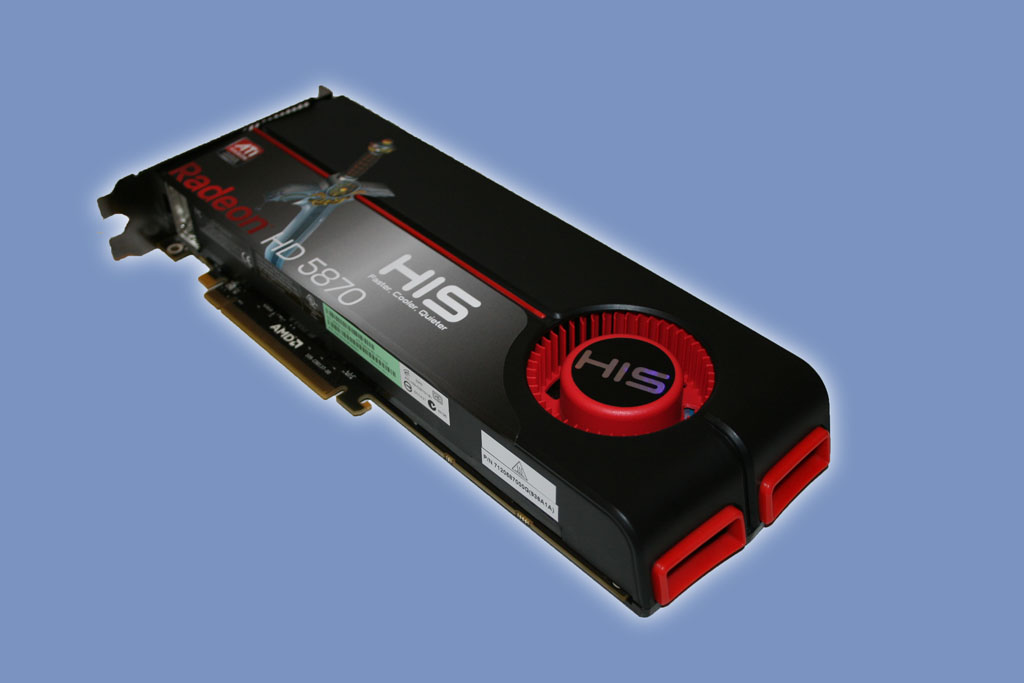 I'm always sceptical when a 'new' graphics card hits the market as time and time again all we get with the new product is a new cooler and a slight bump in clockspeeds. The HIS HD5870 however has blown those fears clean out of the water. The new Cypress XT core on the card along with the tried and tested Samsung HCF0 integrated memory chips afford blistering performance, the likes we are only used to seeing with monster dual GPU cards such as the GTX295. Not once did the HD5870 fail to better, no destroy our previously fastest single core GPU, the GTX285.
Even the  2GB of memory on GTX285 compared to the 1GB on the HIS HD5870 could not save it's blushes at the 5870 still pulled away at the highest resolutions and quality settings. Crysis in particular ran smooth as butter (something I never thought I would say) at 2560x1600 with 8xAA/16xAF, such is the cards fantastic performance regardless of resolution and quality settings.
Now OK, I will admit that I am comparing 'old' technology to new technology and to be completely fair to NVidia they have yet to unleash the 300 series of GPU's which are to be directly pitched against the ATI 5000 series. However, for those not looking to chase the dragon and play the waiting game as it were, the HD5870 is easily the fastest single core GPU on the market today.
The model we had for review, the HIS HD5870 was stock clocked and had the stock cooler. No fancy extras were included, just the standard Molex-PCIe adaptors and a crossfire bridge but even so it was very well presented. I would have liked to have received a hard copy of DiRT2 rather than a voucher but that aside I had few complaints regarding the packaging which was very sturdy and should ensure the product reaches you in A1 condition.
In the past ATI have shown little mercy for those with sensitive hearing and the whistling of the old stock cooling design would attract stray dogs for miles around. Even worse, when on full load, the cards could have been mistaken for Concorde taking off, such was the noise the cooler produced. I am now happy to report that the boffins at ATI no longer work with mufflers attached to their heads and have decided to show sympathy to the gamers by designing a cooler which is very similar to NVidia designs and as such is much quieter. Sure, when the fan spins up the card can become noisy but in ATI's defence this was not very often at all. Temperatures idled in the low 30's and peaked just over 70c after half our of Furmark, a fantastic result.
Overclocking the card was not as great as I would have liked, The catalyst control centre limited clocks to 900MHz on the core (50Mhz over stock) and 1300 MHz on the memory (100 MHz over stock) which was completely stable. To get higher clocks I had to use the new AMD GPU clock tool which was troublesome at best and results were not much more than CCC achieved (924/1320MHz) but these clocks resulted in random BSOD and lock-ups so I stuck with the 900/1300 clockspeeds for the run of overclocked benchmarking which was completely stable throughout. Whether this was an issue with the AMD GPU clock tool I cannot say but I do wish ATI would allow greater flexibility with the Overdrive utility, allowing higher clocks and not limiting them. That said, any overclock is a bonus and the small overclock yielded a good 5% increase on average which is nothing to be criticised.
In short, ATI/HIS have produced a card that is worthy of being named the fastest GPU on the planet at the time of writing and because of this I have no hesitation is awarding the card our coveted 'Performance' and Gaming seals of approval. If you are on the lookout for a card that can cope with anything you intend to throw at it, regardless of resolution and quality setting, the HIS HD5870 should be the first product you consider.
The Good
- Astonishing performance
- Quiet under all but the most extreme load
- Excellent temperatures
The Mediocre
- The price is expensive for a single core GPU
The Bad
- Nothing