To ensure that all reviews on Overclock3D are fair, consistent and unbiased, a standard set of hardware and software is used whenever possible during the comparative testing of two or more products. The configuration used in this review can be seen below:
i7 Rig

As you can see, I decided to run the setup at 4GHz to prevent any possibility of CPU bottlenecks. The 2000MHz bandwidth afforded by the GSKill Trident should also ensure that there are no hold ups in our test setup, allowing the cards to stretch there silicon legs.
During the testing of the setups above, special care was taken to ensure that the BIOS settings used matched whenever possible. A fresh install of Windows Vista was also used before the benchmarking began, with a full defrag of the hard drive once all the drivers and software were installed, preventing any possible performance issues due to leftover drivers from the previous motherboard installations. For the 3DMark and gaming tests a single card configuration was used.

Power consumption was measured at the socket using a plug-in mains power and energy monitor. Because of this, the readings below are of the total system, not just the GPU. Idle readings were taken after 5 minutes in Windows. Load readings were taken during a run of Furmark.
ATI cards are normally power hungry beasts which make PSU's sweat. The HIS HD5870 is a different kettle of fish however as it consumes less power than it's closest rival, the GTX285 on both idle and load tests. Consuming just under 30w less power at both levels, the efficiency of the card is such that it will be cheaper to run than most high end cards on the market. While 30w may not seem a great deal of power consumption, over a long period of time that value can equal a significant amount of money saved on power bills.
Temperatures

Temperatures were taken at the factory clocked speed during idle in Windows and after 30 minutes of running Furmark with settings maxed out (2560x1600 8xMSAA). Ambient temperatures were taken with a household thermometer. As we use an open test bench setup consideration should be given to the fact that the temperatures would likely increase further in a closed case environment.
I was very surprised at the idle temperatures of the card which never rose much above the 30c mark. This is in stark contrast to the GTX285 which was some 10c higher than the HIS HD5870. Load temperatures again saw the HD5870 run cooler than the GTX285, even with the fan set to auto. Noise was rarely an issue as the fan hardly span up at all. In contrast to earlier ATI cards, the HD5870 is certainly much quieter and while it can still be noisy with the fan running at 100%, the card hardly ever reached this limit so you can rest easy in the knowledge that the HD5870 will afford some quiet gaming and not distract you from online, immersible game play.

Overclocking
For our overclocking tests I used the Catalyst Control Centre utility which worked perfectly with our setup. One thing that did concern me was the fact that the clockspeeds were not reported correctly using GPU-Z. The stock ones were picked up fine but when overclocked, GPU-Z still reported the stock clocks. To test if the clocks had been correctly applied I ran some benchmarks and the improvements in frames per second were clear so I can only assume there is a compatibility issue with the latest version of GPU-Z. 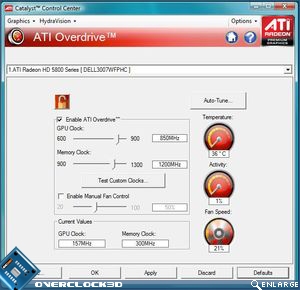 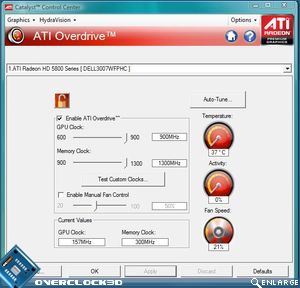 The card ran fine with the sliders maxed to values of 900MHz on the core and 1300MHz on the memory. Not satisfied that this was all the card had to give I tried out AMD's new GPU Overclocking tool. Sadly, it appeared the card could not cope with clockspeeds much higher than what the Overdrive utility offered reaching a maximum 924/1320. Even then stability was an issue so I decided to stick with the 900/1300 clockspeeds the Overdrive utility allowed and ran the benchmarks at this setting which resulted in no stability issues what so ever and only a very minor increase in GPU temperatures.
Here's how COD 4 looked with overclocked vs stock settings:
Not a bad result at all really. While the results were nothing drastically significant, the overclock granted us a few extra frames which is always welcome and thus no doubt we will soon see pre-overclocked version of the HD5870 running this speed as stock.