Packaging & Appearance
The HIS HD5870 arrived in a comparatively small package which was surprising for a flagship product. Featuring 'Excalibar', the mythical sword of king Arthur being ejected by the lady of the lake one could be forgiven for believing that the HIS HD5870 is a watercooled card but alas it is not. The rear of the box displays all of the main supporting features of the card such as Shader model 5, Open CL and Open GL 3 to name but a few. 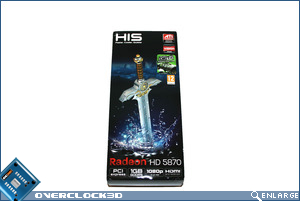 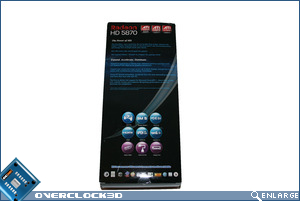 Removing the glossy outer sleeve, I was presented with a plain but sturdy grey box featuring the company emblem on top. I do like it when manufacturers go the extra yard with packaging as it is much more satisfying to be presented with quality packing assuring that you have purchased a premium product, this is in contrast to some companies that are still happy to use brown cardboard boxes. Opening the box, we find a tray which contains the cards accessories which certainly couldn't be described as excessive but with 2 dual Molex to 6 pin PCIe adaptors, manual and driver CD along with a voucher for a copy of DiRT 2, I doubt anyone will be upset with what they find. 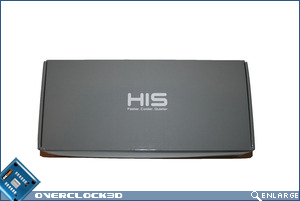 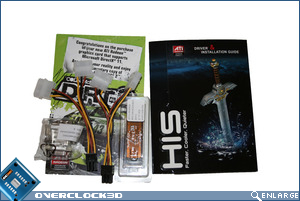 The card itself is huge. There really is no other way to describe it. Being about the same length of dual GPU's such as the 4870x2 and GTX295, I was shocked at how long the card was especially when you consider this is a single GPU. I worry a little about the cooler as anyone who has the displeasure of hearing recent ATI cards when placed under load will attest, they are hardly what could be described as quiet! The cooler looks on the outset to be of a similar design to the heatsink fan shroud assembly of the past but AMD have assured us that this design is quieter. We will wait and see.
Flipping the card over we see that ATI have included a thin metal backplate with a small cutout displaying the familiar ATI GPU clamp. I think adding backplates is so much better than leaving the card bare as this protects the massive amount of transistors on the back of the card so rather than leave the rear of the card bare, as NVidia did with the GTX275, ATI have decided to protect there card. I do however wonder about the legitimacy of leaving the rear of the GPU core exposed. Surely if anywhere needs protecting, it is there? 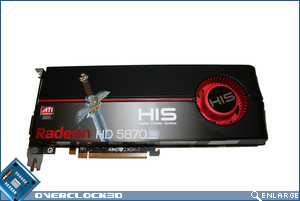 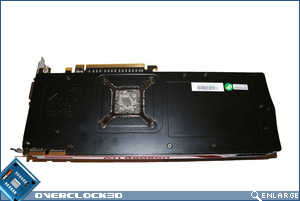 Below you can see the HD5870 compared to the slighter shorter GTX280 which puts into perspective the size of ATI's latest graphics card. The card is 28cm long so please check the spacing in your case if you intend to purchase one of these monsters. As a rough guide - if a 4870x2 or GTX295 fits, so should the HD5870, if you have to cram in a GTX280, you may struggle with the HD5870. Edging away from the tacky clear red plastic of yesteryear, the reference design cooler now features a sleek matt black look with some bright red plastic inserts. The card certainly looks the business and is very pleasing to the eye. 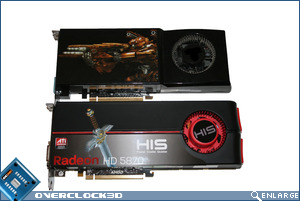 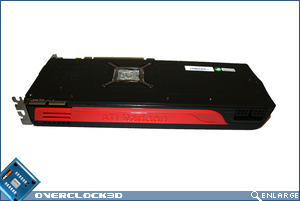 In order to feed the GPU enough power, the HD5870 requires 2x6 pin PCIe power connectors and should arrive from a minimum 500w power supply although it may be wiser to up the ante slightly and opt for a 600w PSU should you wish to overclock the card. Like it's forbears, the 5870 is also Crossfire X capable should you feel one card cannot give you the FPS you desire. 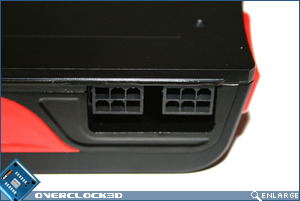 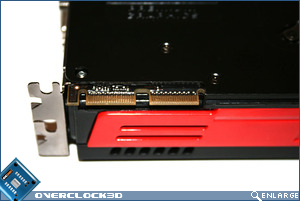 Gulping huge amounts of air is a sign of any performance vehicle and the HD5870 is no different. The intakes of the cooler reminded my somewhat of the front aspect of Burt Reynolds Trans-AM from the iconic 'Smokey and the Bandit' movie. Not that this is a dated design you understand, as I do find it quite attractive. This, if memory serves is the first time ATI have completely shrouded a GPU and while NVidia have been doing this for some time, it is certainly a step in the right direction for ATI.
The backplate area of the card features the usual 2x DVI ports, an HDMI port and a display port socket. What is interesting about the HD5870 is it capable of supporting the maximum 2560x1600 resolution on not just one but three monitors at the same time! 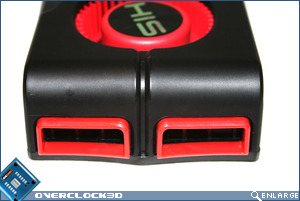 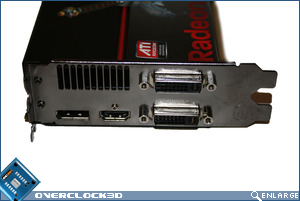 As always we at OC3D don't wish to stop the fun there, we like to look under the hood to see what makes the card tick. The first move was to remove the backplate. With the rear of the card now exposed you can see that the backplate is not there for additional cooling as even though the card has 1GB of GDDR5, no memory IC's were found on the rear of the card. Removing the top of the cooler was a relatively simple affair and after a small amount of 'jiggling', the heatsink came away. The power regulators, SMDs and 8x128MB GDDR5 memory chips all had thick thermal tape attached to allow the transfer of heat with only the core receiving the thermal paste treatment. 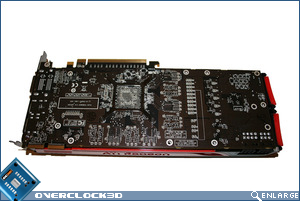 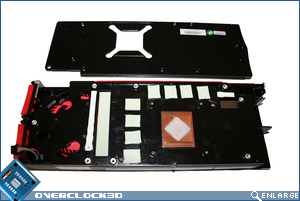 The copper base of the aluminium finned heatsink contributes the bulk of the HD5870's 1KG weight. Our cards heatsink has a near perfect amount of paste applied which in turn resulted in a near perfect contact to the exposed Cypress XT core. When idling in windows the cards temperature rarely exceeded 31c which is testament to the cards cooling capabilities and power efficiency, using just 27watts of power. Increasing the card to full load and it will consume up to 188 Watts so inevitably, the 75x20mm cooling fan will spin up to audible levels but surprisingly, not excessively so, certainly not to the audible levels of previous generation ATI cards. 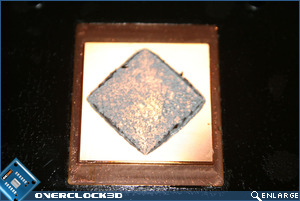 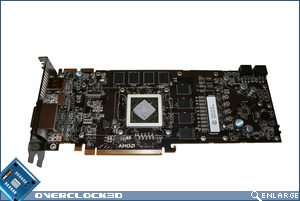 Below we see the guts of the card with the Cypress XT core and 8x128MB GDDR5 HCF0 Samsung chips we are now familiar with. These memory chips were also used in the 4890 series and have proven to be excellent overclocking chips. Even at stock speed they are clocked to 850MHz, couple this with a 256bit memory interface and it should afford plenty of bandwidth for the new core. 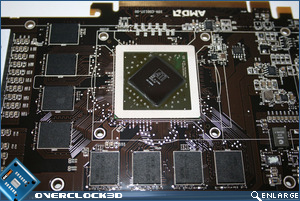 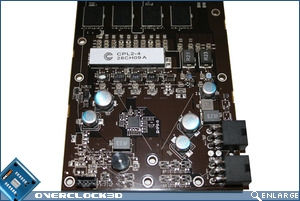 Count those transistors! Co-founder of Intel, Gordon E Moore stated way back in 1965 that the number of transistors would double approximately every two years. This became more commonly known as 'Moore's Law'. For the most part, his prediction has been very accurate however, ATI are keen to point out that the HD5870 have broken this law by increasing the transistor count from apx 956 million to over 2150 million!
The Cypress XT core you see below features 1600 SPUs, 80 TAUs and 32 ROPs, doubling that of the previous monster 4870 which is an amazing achievement and should be exemplified in the benchmarks. 2.72 TFLOPs is sure going to take some beating so those who vividly support the green team would do well to keep quiet as ATI hold all the aces at present and with technological advances such as these, ATI are making a big push to be back on top again in the single GPU sector. 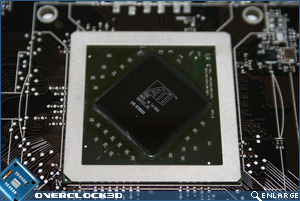 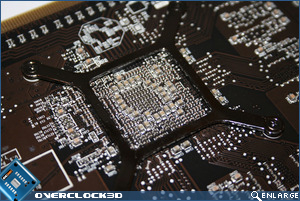 What ATI and thereby HIS have produced is a very well rounded, no frills product. The specification and technology improvements speak for themselves and should need little explanation other than I expect to see some very tasty results from our benchmarking suite. Before we start to go through the figures though, lets take a look at the test setup and overclocking results...
«Prev 1 2 3 4 5 6 7 Next»