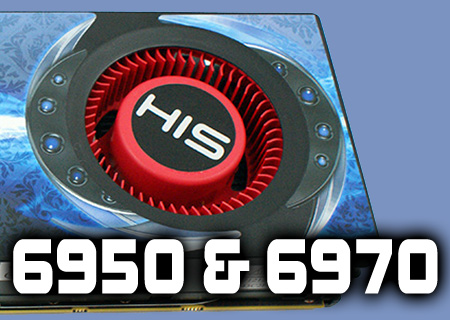 This also made it easy for the average consumer. Sure we might know that the HD6 series isn't really a direct replacement for the HD5 series, and isn't a direct competitor to anything nVidia offer, but we're surrounded by this every day. Try explaining to the "man on the street" that the AMD performance line roughly goes HD6850, HD6870, HD5870, HD6950, HD6970 and at the top is the HD5970.

It just makes absolutely NO sense. I'm not sure what the Sunnyvale Braintrust was thinking, but when you lay it out in black and white it's very illogical.

According to AMDs roadmap the HD6870 was equivalent to a theoretical HD5890. Now in Q4 the 5 series, apart from the HD5970, is completely eliminated from the equation as the HD6870 clearly didn't stack up well at all against its similarly named brethren and we have the HD6950 which does just about meet the performance of the HD5870 and so is the first sensible upgrade if tessellation features are important to you.

The fact that a small discussion about new models has meant quoting SIX different graphics cards, FIVE of which are new and 'current' models, hopefully demonstrates clearly enough that what might work in a Powerpoint presentation doesn't translate with any clarity to the consumer.

Finally, before we get away from the insanity of the AMD business model, a small word has to be made about the performance of the HD6950. We know that it is in no company's interest to make the best they can from everything, but the manufactured slowing of the HD6950 is so perfect and synthetic as to leave a nasty taste in our mouth. Rather than nod our heads at them making the best they could for the price, they've clearly just determined a price and then cut the product down to suit.

Phew. So with that out of the way, how do they perform? The HD6950 isn't bad at all. The £220 price-tag should make it attractive enough to anyone who has yet to join the DirectX 11 generation which is the sole intention of AMD with this product release. So job done.

If you want a little more for your money though you definitely should save the extra £60 needed for the HD6970. It's better enough than it's lesser-numbered sibling to justify its increased price-tag and AMD have pitched it directly at the brilliant GTX570. Although their "product positioning" slide implies it's ahead, it clearly isn't. The GTX570 has it equalled or beaten in every test but Unigine. Sure Unigine looks awesome but it's just a benchmark. Nothing actually uses it and the tessellation performance isn't translated into gaming results.

It might seem like we're just kicking the HD69 cards. That isn't the case at all. The HD6850 gives great performance for a few beers over a couple of hundred and the HD6970 does its job of providing a good performance card in the sub-£300 bracket. Both are fairly cool, and fairly quiet and the tessellation improvements AMD have brought really do make a difference over the previous cards.

It's just the combination between the needlessly confusing naming, even more confusing decision to place two new products in exactly the same market segment and, there is no denying it, disappointing performance of the cards has just left us underwhelmed.

We've often said that CUDA and PhysX have so little benefit that to choose an nVidia card over the better performing and cheaper ATI offering was silly. Now you can have a higher performaning, quieter, CUDA and PhysX enabled card that already has the tessellation for the same price as the AMD offering. Why would you buy anything else? If the AMD cards were either substantially cheaper, or gave better frame-rates, then they might be worthy of consideration. As it is they're perfectly fine but you'd have to be a dyed-in-the-wool Radeon fan to consider either as the best choice at their relative market position.

We can't remember the last time we came away from a top-end Radeon review and had to admit both disappointment and find no better adjective in our lexicon than "alright" but that's the impression we get. The HD6950 and HD6970 are alright. Perfectly good. Fine enough.

Only you can decide if 'good enough', is good enough for you to spend your money on. For us we'll still take a GTX570 thank you.

Thanks to HIS Digital for providing the cards for todays testing. Discuss in our forums.