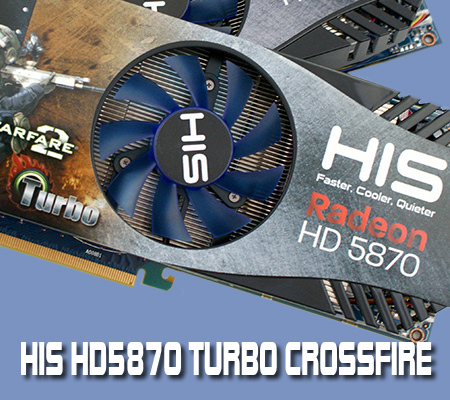 I don't know about you, but we almost need to stop and catch our breath after that.

Without question the HIS HD5870 Turbo X Crossfire setup we had in for review today took our expectations and threw them out the window. Throughout our testing it constantly redefined what we considered to be possible, even with two 5870s. The results we achieved were far above anything we'd seen in previous 5870 Crossfire tests using reference cards.

Backtracking a little, it's worth mentioning the iCooler V. Unlike certain cards the ATI HD5870 already has an excellent reference cooler capable of cooling the card sufficiently at sensible volume levels. The HIS iCooler V is a total cut above. Even when Crossfired, a situation you'd expect to find the top card cooking happily, the temperatures never rose above 68c. Despite them being under loading they also proved very quiet and when we returned to the desktop and they slipped back to the standard 2D speeds of 30% they were pretty much inaudible.

With a 900MHz core speed out the box the Turbo X definitely doesn't want for a bit of power. If you're seeking a single card our results showed this definitely should be on your shortlist.

However we're not here for single card shenanigans. In Crossfire the Turbo X absolutely bludgeoned anything we threw at it into submission. Getting higher than 26000 in 3D Mark Vantage is impressive enough, but hitting 77 FPS in Crysis Warhead is truly a jaw-dropping feat. There is very little we can find to say that hasn't been writ large in the graphs. You'll definitely have trouble making these cards struggle.

So brilliant were they that we broke our testing methodology just to bring you a "what's possible" by using a heavily overclocked i7 980x. Even though we were limited by using air for all of our cooling and demanding that our clocks were at levels anyone could achieve and run 24/7, we still smashed the highest Vantage score we've ever seen with the HIS Turbo X's producing 32291 3D Marks.

So they are cool, quiet, well built and have epic performance. What's wrong? There is only one thing, and it's the one thing that is always wrong when you're at the cutting edge of performance. Price. At around £700 for a pair these certainly aren't for the shallow of pocket. However even those of us who's means are more modest love to dream don't we.

The old saying goes, you get what you pay for. Here it is definitely true. Yeah they might be £700, but just look at that performance. Go back and stare at those graphs. Imagine what it's like to have this power at your fingertips.

Sell a kidney. Sell your Granny. Whatever you have to do, get your hands on these. An easy winner of the OC3D Performance Award.

Thanks to HIS for providing the Turbo X's for todays review. Discuss in our forums.

tinytomlogan
Quote:
Aye was a crazy night, not many reviews make me want to stay up till 4am happily playing, so much for 30k, I was gobsmacked with 32k!Quote