Hopefully you've all recovered from the carpet burns on your jaw after seeing the performance and pricing of the newest Nvidia RTX 3080 Ampere GPU.

We barely have, and no sooner have we caught our breath than their new flagship model dropped on our desks, the RTX 3090. After the RTX 3080 this is a bit more like the RTX 2080 Ti was in terms of performance and pricing, comfortably smashing frame rates as hard as it smashes your bank balance. Whereas the RTX 3080 was a graphics card for those of you with a decent budget but still not more money than Solomon, this card is much more in keeping with the RTX Titan ethos and pricing, suitable only for those of you with massive bank accounts and/or a demand for the sort of high frame rates that can only be achieved by class leading hardware.

The Gigabyte Gaming OC version of the RTX 3080 was a triumph of affordable pricing, fantastic cooling, and high performance so of course we had to see how the same cooler design matched up with the RTX 3090 core. Cast a quick eye over your children, enjoy having both kidneys, because by the end of this you'll be looking to sell one or the other.

Whenever there is a new product you can get a rough idea of where it sits in the market by seeing what the manufacturer is comparing it to. The RTX 3090 is compared to the RTX Titan, and that tells you all you need to know. If you like some raw numbers then how about this, the Titan had 4608 CUDA Cores compared to the 10496 here, 288 Texture Units vs 328 on the RTX 3090, and a massive boost to the memory clock speed has seen the bandwidth go up from 672 GB/s to a whopping 936 GB/s. This is one of those products which is so much of everything that numbers become meaningless.

Whilst we might all be interested in the gaming performance, the RTX 3090 is very much designed both for creators and for futureproofing things. The primary focus of a lot of the Nvidia literature is how the 24 GB of video memory will enable renderers to produce more frames faster than they would on lesser memory thanks to that enormous, fast, frame buffer. Similarly the Ampere GPU is aimed at 8K gaming or using DSR to crank titles to new heights of crisp gaming without compromising too much in performance terms. All things we'll be testing as we run through the benchmarks. Naturally our primary focus is upon the RTX 3090's utility as a purveyor of blinding frame rates in gaming titles rather than something which can render 3D scenes faster than before. Partly because we're a gaming site more than a creation site, and partly because - as anyone who has done 3D work knows - rendering requires an entire warehouse full of hardware to do at anything approaching sane rendering times. No single GPU will change that, no matter how much quicker than a RTX 2080 Ti it is.

Gigabyte are keeping the core clock speed under wraps in their specification tables, but the impatient amongst you need only wait a couple of pages and all will be revealed thanks to the all seeing eye of GPUz. 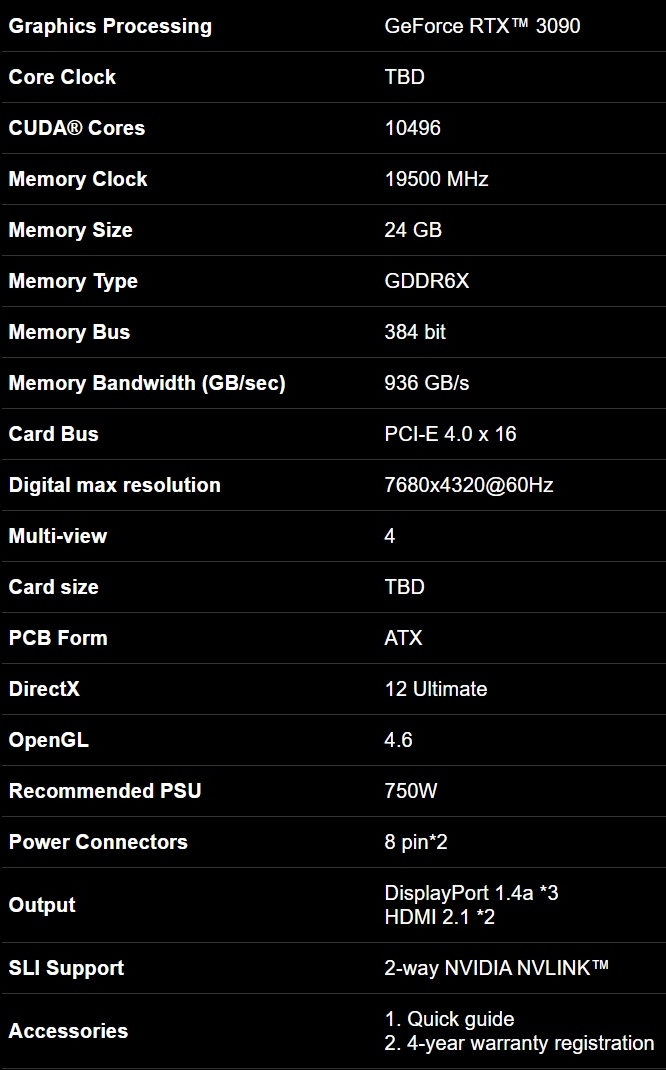