Nobody could accuse the RTX 2080Ti of being a card that lacks in performance. With the combination of the latest Nvidia Turing TU102 GPU and its attendant RT Cores (hardware ray tracing) and Tensor cores (AI based Supersampling) it manages to make every game look as good as it is possible to do whilst managing to game at the magical 60 FPS at 4K HDR. In short, we all want one.

Nvidia's Forceware drivers have, for a long time, included some automatic overclocking in the form of their GPU Boost technology. This takes advantage of any thermal and power headroom that might be available to push the card harder than its stock speed wherever possible. The latest version, GPU Boost 4.0, performs so well that it takes a fair amount of effort to better its capabilities with manual overclocking. However, as we're sure you wont be surprised to learn you can push the cards harder than an automatic option might do and the resultant performance rewards you in spades, especially on this behemoth of a card.

To this end we need as much thermal headroom as possible, and that's where today's preview of the Gigabyte RTX 2080Ti Aorus Extreme Waterforce 11G comes in. Adding an AIO to a graphics card is nothing new with a few cards on the market sporting built in watercooling. However, what puts the Gigabyte Aorus Extreme Waterforce into a category of its own is how much effort they have put into the RGB lighting we all love, and how relatively affordable the pricing is. Obviously nobody is going to claim that an RTX 2080Ti is within the reach of your average user, but the word on the grapevine is that the Waterforce will be significantly cheaper than the competition.

We'll be bringing you the full review later this month, but for now let's look at it in the flesh and we can all spend the time between now and the full review working out if we really need both kidneys...

Such is the consistency of the Nvidia design the specifications table doesn't make for particularly exciting reading. If you didn't know better from the photos you wouldn't realise how much the Gigabyte Aorus Extreme Waterforce differs from the standard designs. The beefy factory overclock might be the first clue, and the addition of a radiator size might raise an eyebrow, but otherwise at a casual glance it doesn't look particularly different from any other RTX 2080Ti. We know differently though which means it's picture time. 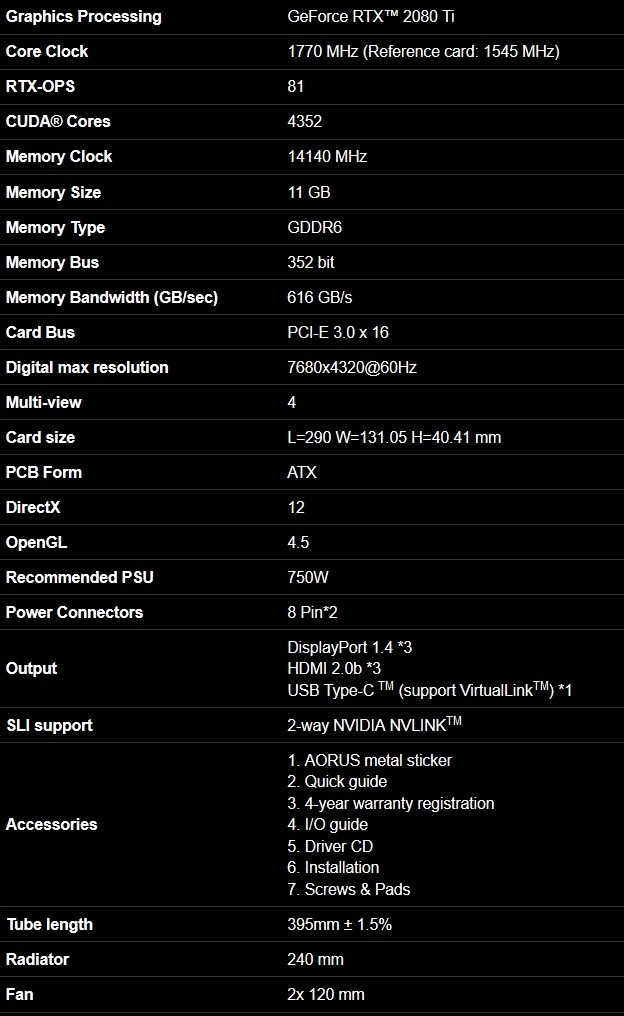 Warchild
Quote:
Even the logo