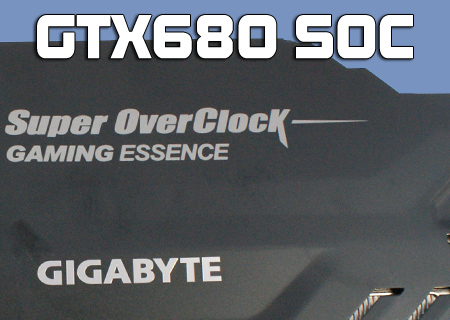 One of the very cool things about the current generation of graphics cards for end users is that even the bog standard specification models have huge performance. Of course this does mean that the thriving industry of big companies pumping out pre-overclocked cards with a much quieter cooler is somewhat in danger. At the very least they need to have enormous benefits to justify the extra cost. The last time we saw a Super Over Clock it was definitely worthy of the extra money, being probably the finest GTX580 around.

The same can't be said for the GTX680 SOC. There is one thing about the card that you first notice when you look at the pictures of it, and especially so when you hold it in your hand, and that's the unique (as far as we can recall) cooling solution.

We demand three things from our coolers. In descending order of importance, quiet, cool (duh) and good looking. So let's start with the noise. It has 5 40mm fans on it. Expectations are for something that would run a Delta close. As it is the cooler isn't as loud as it looks like it will be, but that's hardly saying much. No matter what you do with power management tweaks there is only so much that you can reduce the decibel level and under load this is a lot louder than even the reference cooler. So with one black mark against it, maybe it's at least good at cooling? Nope. It's cooler than the default nVidia model, and also cooler than the Windforce although that wasn't exactly designed for the PCB. So when we compare it to designs that were created for the GTX680, the MSI Twin Frozr and the Zotac AMP! we find the SOC is not only considerably louder, but 6°C hotter too under load. At idle it's even worse. The card is quiet but well over 40°C.

Finally the looks. Not only is it a triple slot cooler, but with the addition of the fans on the side its positively gigantic. Definitely not for those with a small case. Or a medium case. We don't remember any GTX680 having heat issues, so why the big cooler? It looks rubbish, like a bodge job put together by someone who couldn't afford proper fans. It's too hot, and too noisy. Impossible to recommend and quite how it saw the light of day is beyond us.

Performance is pretty good, especially out of the box. If there is one thing the GTX680 SOC has got it's a great overclock. It doesn't leave us much headroom to squeeze anything extra out. Sure we might have lost the silicon lottery with our model, but again when you're laying down the thick end of £500 you'd expect to be limited only by thermals and power. As we've seen through our testing, as you ramp up the image quality the SOC isn't quite capable of delivering the highest scores. It's by no means disgraced, but just not quite as accomplished as the Zotac AMP! and certainly not the same quality of all-rounder.

This reminds us very much of the ASUS Matrix. The card performs well in spite of the many additions rather than because of them thanks to the excellent underlying GPU. All the extra bits and bobs do nothing to enhance the product at all and just drive the price up. An unbranded GTX680 will serve you as well and if you demand something with a bit more flash and flair then grab the Zotac AMP!. Normally we'd give this a bronze thanks to the quality of the Kepler GPU, but that cooler is such an abomination, so wholly without a redeeming feature, that we'd be doing both you, and the commitment to excellence we stand for, a disservice to do so.

Thanks to Gigabyte for supplying the GTX680 Super Over Clock for review. Discuss it in the OC3D Forums.

Tom not interested in making a quick video looking the the card for a few minutes so we can all adore its rather strange looks?Quote

PetrolHead247
Lol i had a feeling as soon as the first pics were released of this awful looking GPU that it was gonna flop. No idea what Gigabyte were thinking, this is pretty pantsQuote