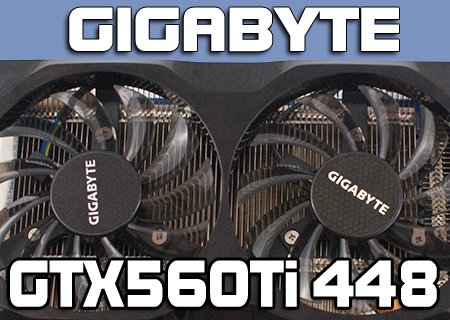 The current generation of graphics cards has been dominated by nVidia after a couple of generations owned by ATI. The GTX580 easily holds the extreme performance crown, the GTX570 is the best performing high end card, and the GTX560Ti can rock hard in the tightly contested middle-range sector of the marketplace.

Indeed it's the GTX560Ti that is one of our favourite cards. It's exceptional value for money, even in bog standard form, and the performance increases from overclocking are very good indeed.

Of course all GPUs are limited to some degree by their architecture. No matter how high the frequency of the GPU Core can be set eventually the lack of Cores becomes the limiting factor.

Enter the nVidia GTX560Ti with 448 Cores. Yes that is its official name and if ever a product name was 'exactly what it says on the tin', then this is it. It's a GTX560Ti, but with 448 Cores. It is designed to fit directly between the GTX560Ti and GTX570.

This isn't a permanent upgrade to the GTX560Ti, nor a permanent card squeezed into the middle of the nVidia line-up, but rather a special edition released to coincide with a couple of Triple-A titles, namely Battlefield 3, and Batman Arkham City. This goes a long way to explaining why it hasn't received the GTX565 moniker.

In keeping with its positioning as 'better than a stock GTX560Ti but not as good as the GTX570' the GTX560Ti with 448 Cores gains a lot of extra cores, but loses a little in the default core speed. The other big change is that the GTX560Ti has the full GF110 as found in the GTX570 and GTX580, rather than the GF114 we find in the original GTX560Ti. 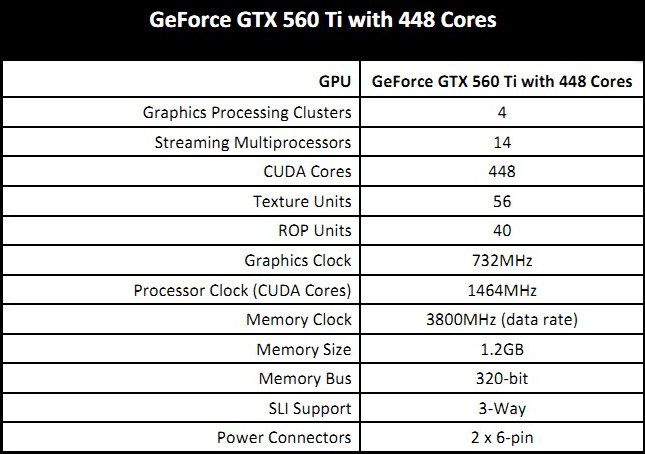 SieB
Nvidia seem to make a habit of releasing revisions of existing cards that perform slightly less than the next model up but price them only a few quid less. If you have £244 why wouldn't you spend £6 extra for a better card?

This release seems pointless to me and it's like Nvidia is just saturating the market to sell more cards.Quote

badtaylorx
it bugs me when nvidia does this........

my next cards are STILL gonna be those sparkle calibre 560ti'sQuote

Carbonific
My biggest gripe with Gigabyte's cards are that they're still putting blue PCBs with black coolers. It seems strange that they haven't adopted the same stylistic choice as they did with their motherboards and went with black PCBs for the higher end stuff. A shame because I think it'd complement the cooler incredibly well.

Regardless: as others have said, it's a nice card, but I'm not sure where it's supposed to fit on the market with the price tag that it's carrying.Quote

nothingspecial
Interested to see if they play ball with an old 384 core GF114 based card in SLI. Would be slightly tempted to grab one in that case. If not, then I'd just wait and save for the "670"Quote
Reply