We often say how quickly the market can move in a particular direction and nowhere is this better demonstrated than in the raft of RGB technologies that have appeared on every product you can think of this side of power supplies.

For many years the Gigabyte high end graphics cards have been released under their Windforce banner, with the triple-fan cooler the star of the show. Times have changed though and now the lighting is the big selling point, hence their GTX 1080 Ti cards coming out under the Aorus banner. As you can see from the image at the top of the page the lighting is more than just a brand label on the side of the card.

With more display outputs than you could shake a stick at, RGB lighting and a factory overclock mode the Gigabyte GTX 1080 Ti Aorus promises to have many of us reaching for our wallets. So let's find out how it performs.

If you've been following along with the GTX 1080 Ti then the majority of the specifications on the Gigabyte Aorus will be familiar to you. The two most notable features, beyond the inclusion of the Aorus lighting which gives it its name, is the ability to switch between a balls-out OC Mode or Gaming Mode. There isn't much of a clock difference between the two, but it's nice to have the choice. Secondly a glance at the output options show that Gigabyte have really gone to town here, but to demonstrate that fully we need to look at the card itself, so let's do that. 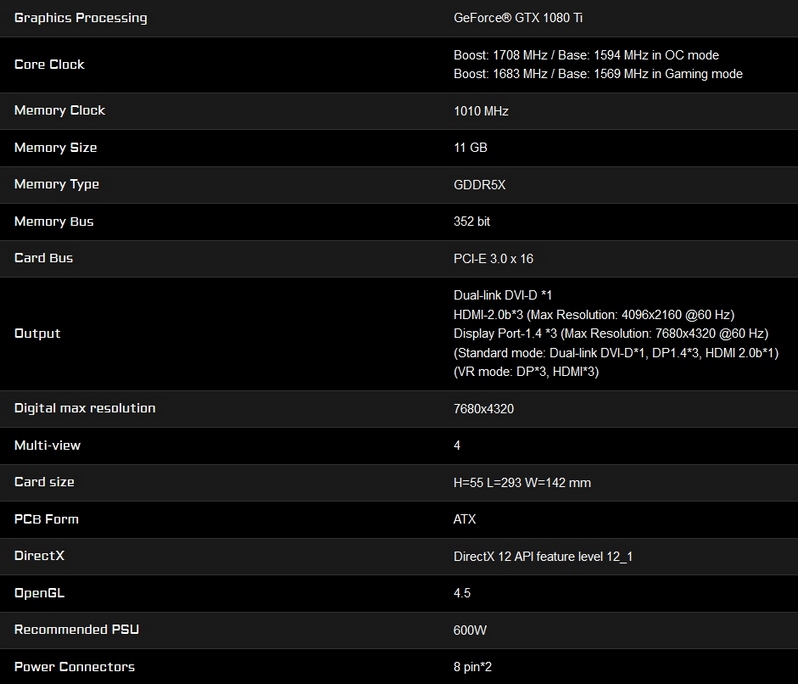