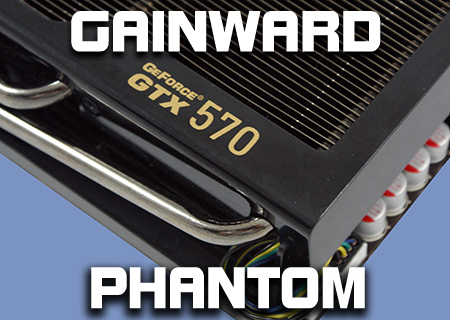 There are two distinct elements to the gauging Gainward GTX570.

Firstly we need to compare it to the reference nVidia card. In this respect there isn't a lot of difference in pure performance terms. Throughout our graphs they were very nip and tuck with neither gaining or losing much to the other. 2 or 3 frames-per-second here or there most definitely wont sway anybody either way.

Perhaps the big surprise was that the, admittedly mild, overclock Gainward supply the Phantom with doesn't really make much of a difference. However when the card was overclocked as well as we could force it, considering there is no standard method to increase the voltage to allow for higher overclocks, it generally responded much better than the reference design. Nothing earth-shattering, but consistently enough that you could make a case for it performing more impressively.

The second, and by far larger, thing to take into consideration is that cooler.

We adore it. Under the shroud it's very similar to many other tri-fan designs that have come through the OC3D offices. It is very quiet even when under heavy loading, far quieter than the already reasonably quiet reference design. But it's not about compromise as the temperatures are exceptional. When overclocked and under loading we didn't see the temperatures go above 64°C which is remarkable for a modern high-performance card. Doubly so when we consider the swathe of heat issues its predecessor suffered from.

However it's not just about temperatures and noise. Aesthetics play a part too with this being one of the sexiest cards we've ever seen. The black and gold motif would look beyond stunning if you were considering pairing it with the Gigabyte UD7 in a new LGA1155 based rig. Even if you weren't though this definitely lends an air of class to proceedings.

Perhaps the only disappointment we have is that the tremendous cooling potential of the Gainward GTX570 Phantom isn't really harnessed fully. This would have been the perfect opportunity to apply Gainwards considerable skill gleaned from their Golden Sample cards to produce an all-conquering model.

Despite that small gripe the performance is still fantastic and when you couple it to that innovative cooler it has to win our OC3D Silver award.

Thanks to Gainward for supplying the GTX570 Phantom for review. Discuss in our forums.

Black
What setting did you use Tom on Metro 2033?Quote

henrybutt
Is it just me or was this designed specifically to match the Gigabyte P67A-UD7... they would look so sexy together

Morbious Stone
Man That card is quite sexy, Great review I was laughing Most of it! Gainward needs 2 start selling in the US