Here's how the cards stacked up as far as overclocking was concerned: 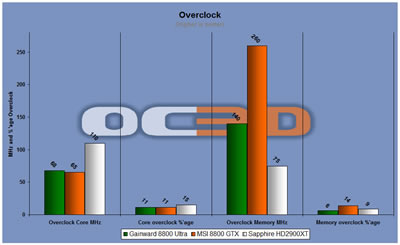 The Ultra did not seem to quite have the "give" in it that the GTX did and I started getting tearing, glitches and freeze-ups when I pushed any further.

I ran a quick 3DMark06 to see how the overclock went and what the advantages were. 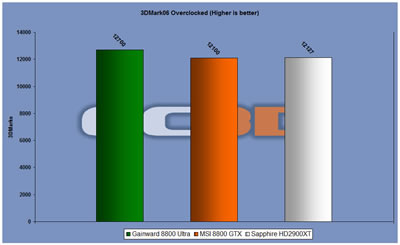 A healthy increase of 400 3DMarks or so shows that a small OC goes a decent way.

The fan on the 8800 Ultra is of a similar ilk page 2, last paragraph.Quote

FarFarAway
No that's not a typo

I thought the Ultra's had a tonne of OC headroom... Evidently not.

Looking at the OC results, budget or not, get a GTX and OC it - nothing that hasn't been said before. With the money saved get a better CPU or more RAM.

Edit: LOL - I think ilk is a very English word