EVGA have been having a few problems of late. Once upon a time they were a company which were at the peak of high end graphics cards, and everyone in the OC3D office has owned at least once. In recent years though they've slightly slipped under the radar and ended up behind some other brands when it comes to the first name you think of when planning a new purchase.

Unfortunately for EVGA the only time that everyone was paying attention - the release of Pascal - was because they were having boards blow left, right and centre. Now they are by no means the first company to have a product range that suffered problems, and the usual course of action is to pretend it never happened or, if a company is feeling particularly confident and brave, subtly allude to the issue by releasing a B-spec version that fixes "some problems a limited number of users might be experiencing".

To EVGAs eternal credit they have done something almost unparalleled in the hardware world. They have taken complete ownership of their failure and redesigned from the ground up in a belt and braces manner that not only guarantees you're are extremely unlike to see a repeat of the exploding MOSFET problem, but that if by some miracle you do, the board has safeguards in place to ensure your expensive purchase doesn't become a door stop.

This is the low end of the EVGA GTX 1080 Ti range, although of course any low end GTX 1080 Ti is still an absolute performance monster, but the key features are all to do with the improved cooling, sensors and generally ensuring that no part of the card will quietly fry itself. It's better explained in the slides, so let's move on to look at those. 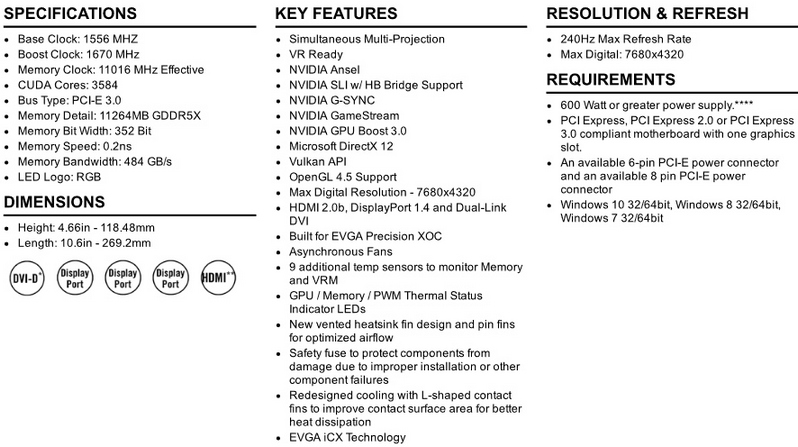