What do you think of EGVA's AIO cooling solution?

Today we are looking at an unusual piece of GPU hardware, but one that has certainly become increasingly popular in recent years.
Hybrid coolers are not new on modern GPUs, though they offer users the ability to achieve thermal results that are similar to water cooled hardware while coming in a form that requires minimal maintenance and comes with with a full factory warranty.
While air coolers are perfectly adequate for cooling modern GPUs, especially on aftermarket designs, it is undeniable that water cooling can result in more pleasing thermal results while also providing a quieter acoustic profile. This is one of the main draws of liquid cooling, especially for heavy overclockers as liquid cooling can provide increased thermal headroom and a quieter PC under load. 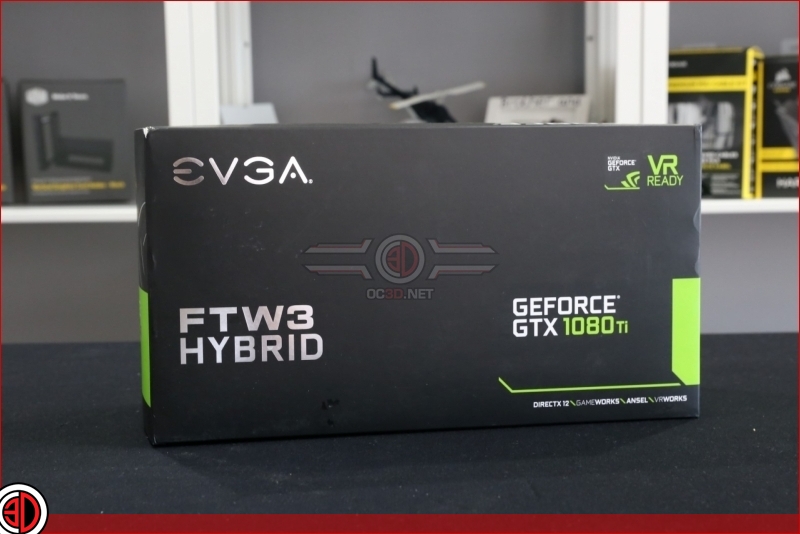 Looking at the packaging for EVGA's GTX 1080 Ti FTW3 Hybrid we can see that it is using pretty standard Nvidia-style packaging, though the box is understandably thicker to accommodate this GPU and its radiator.

We wouldn't advise using this, as any reasonably modern PSU should already have an 8-pin PCIe power cable already. 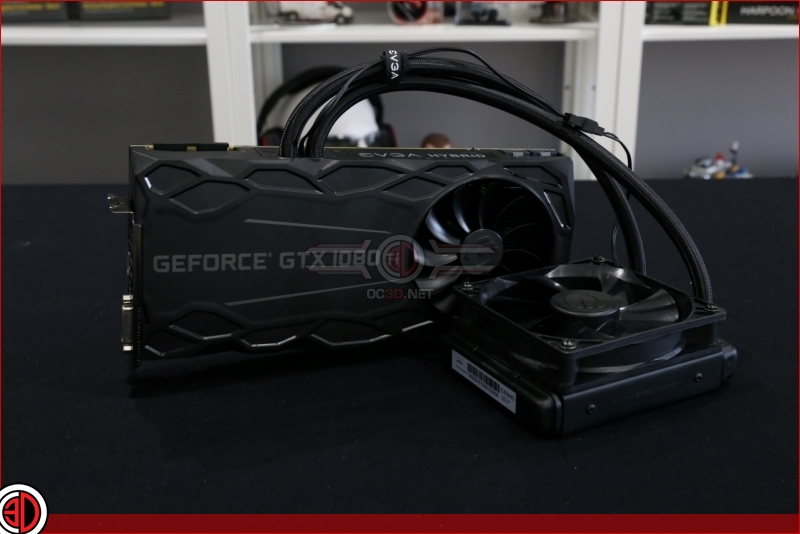 The GPU itself comes with a dark aesthetic, similar to EVGA's current generation of "Black" series GPUs, making this GPU ideal for a stealth themed build if you can turn of this GPU's LEDs in software.

Moving around to the backplate we can also see that it offers a large amount of surface area, making it ideal to cool this GPU passively from the rear. This backplate is connected to this GPU's memory and VRM areas, offering additional cooling. 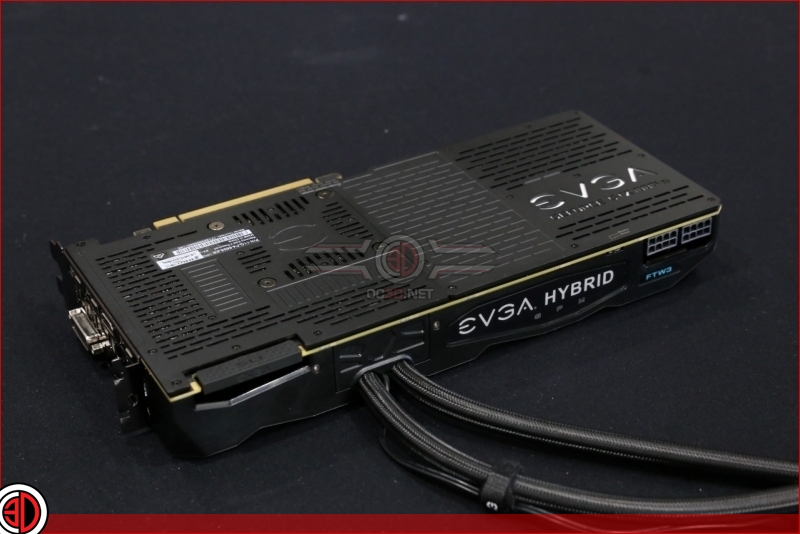 When looking at the specifications of this GPU we can see that the EVGA GTX 1080 Ti FTW3 Hybrid offers improved specifications over Nvidia's Founders Edition model in almost every regard with more power phases, a higher maximum power draw and extra redundancy with a second BIOS chip.

When compared to the standard GT 1080 Ti FTW3 Gaming model we can see no listed clock speed improvements, though Nvidia's Boost clock technology will likely take the GTX 1080 Ti to higher actual boost clock levels thanks to its lower operating temperatures. 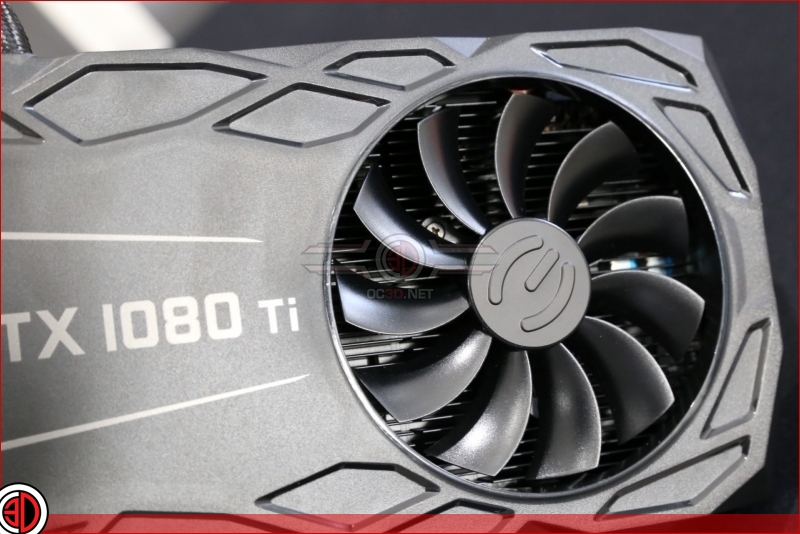 When looking at EVGA's hybrid cooling design we can see that the company has taken things very seriously, with a huge cooler under the GPUs integrated fan sitting over a large VRM heatsink which features a huge surface area. We also know that EVGA has found a way to connect their VRAM chip coolers to the AIO cooler itself, offering it

We also know that EVGA has found a way to connect their VRAM chip coolers to the AIO cooler itself, letting the copper plate be cooled by the AIO, passively with airflow from the GPUs fan and from the rear with EVGA's backplate. EVGA says that this solution will keep this GPU's memory cooler than standard air cooler designs.

Below is an image which showcases EVGA's Hybrid cooler design, this is not from the GTX 1080 Ti FTW3 Hybrid, but it is very similar. We have not taken apart our review sample to take a picture ourselves as we have only started conducting performance testing on this GPU. 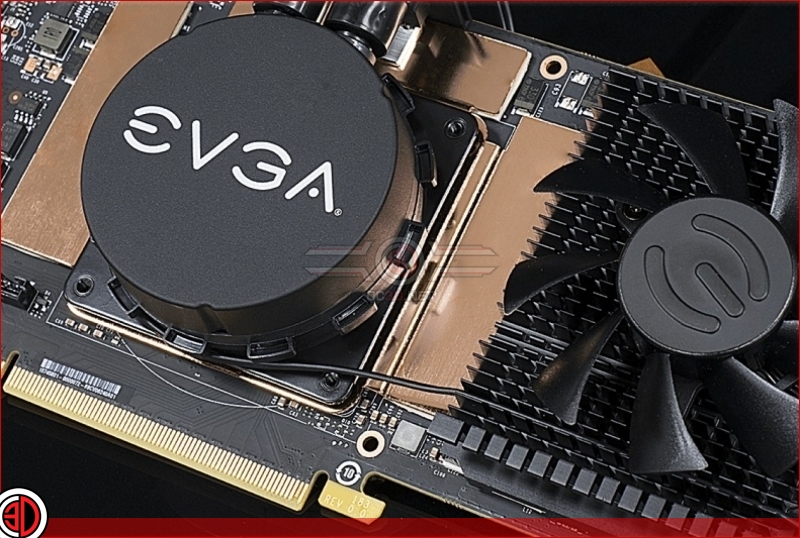 Even with this brief encounter with EVGA's GTX 1080 Ti FTW3 we can see that EVGA engineering teams are taking GPU cooling seriously, offering one of the most robust hybrid GPU cooling solutions that we have ever seen on the market.

While some consumers may like to see some more surface area/fins on the GPU's VRAM coolers, it is clear that EVGA's solution is more than capable of cooling the GTX 1080 Ti's 11GB of VRAM. The integration of the AIO liquid cooler into the VRAM cooler design is very innovative and the additional cooling provided by the backplate should ensure that this cooler experiences no issues.

Moving on from that then there is the VRM cooler on this CPU, which sits directly under this GPU's fan and offers a tonne of surface area, ensuring that the provided fan will not need to run very fast in order to keep this GPU's VRMs in check. EVGA has certainly upped their VRM cooling game.

Over the next week or so we will be putting this GPU through its paces, so expect a review for this graphics card in the near future. We are also working on reviews for several X399 motherboards as well as some other products, so please come back to OC3D how well some of today's latest hardware releases perform.

You can join the discussion on EVGA's GTX 1080 Ti FTW3 Hybrid GPU on the OC3D Forums.

Korreborg
A measurement of water temp would be great. After 2 hours of full throttle OC.

AlienALX
I don't think this will fare very well after two hours of all out full throttle OC, tbh. I put my TXP on a proper loop with a cooled back plate and it was a bit of a horror show. 86c on the core. Not sure about coolant temps I did not fit a sensor but yeah, even I know that wasn't good.

A 120 rad is not suitable for all out overclocking on these cards. They are just too hot. I've had to lower my temp limit and power target right down, but do still get 1800mhz in the 50s. Without all of the noise I had before.Quote

Warchild
Quote:
Didn't you fix that 86C problem though by a patch update or something? Or am I thinking of someone else?Quote

Korreborg
Quote:
Hmmm. I might have to play a little with the card then. I didn't think that lowering the powertarget from 120 to 100% would do that big a difference.Quote

AlienALX
Quote:
I had the issue with a game and yes, it was fixed by updating it. However, that isn't what fixed the overall problem. The game was simply using the GPU 100% and after the patch that dropped to 80% or so.

However, two hours of Valley resulted in the same problem. 83c. The fix was simple, just reduce the power target down to 75%, reduce the max core temp to 75c and reduce the overclock from 235 (max) down to 200.

Bingo bongo, temps in the 50s, 56 being the highest, whilst still holding a minimum 1800mhz clock

Thing is, that isn't what people are going to be doing with these I feel. As I said, a 120 rad is simply nowhere near enough to maintain clocks over 2ghz with the power target and heat targets maxed. I hope EVGA have put some seriously strong pumps in these, because they are going to feel the heat something rotten.Quote
Reply