It is a strange thing about the speed of modern life that things which would have once lasted close to a decade are burned out in a couple of months now, maybe less. When we were children it was crazes like the Hula Hoop, or Pogs, or Tamagotchi. Now we're older it's meme's that come and go. Leeroy Jenkins, the 'could you not' girl, Doge, all flamed up and burned away.

What has that to do with today's review of the GTX 1070 Ti from EVGA? It's the subtitle, the For The Win edition. That says a lot about how right EVGA got the formula the first time round that the FTW editions are still with us at all, whilst providing a cautionary tale about naming your product after something as transient as a piece of internet slang. W00t.

But enough about the name. When we reviewed the EVGA GTX 1080 Ti FTW3 Hybrid it quickly established itself as one of the better takes on the GTX 1080 Ti formula that we've reviewed, and given how impressive the GTX 1070 Ti has been we have high hopes for the EVGA FTW2. With the iCX cooler in place and all the effort EVGA have made to ensure that the card will not only last a long time but if the worst does happen and there is a massive power spike then the included fuse will blow before your card does. We surely don't need to tell you that replacing a fuse is a lot cheaper than replacing a GPU.

As part of the FTW range the EVGA GTX 1070 Ti FTW 2 has their full range of high end components and options in place, from the RGB LEDs through the iCX cooler. If you're of a nervous disposition there are plenty of monitoring points, LED indicators and the aforementioned fuse to ensure that you're fully aware of the state of play and covered if the worst should occur. 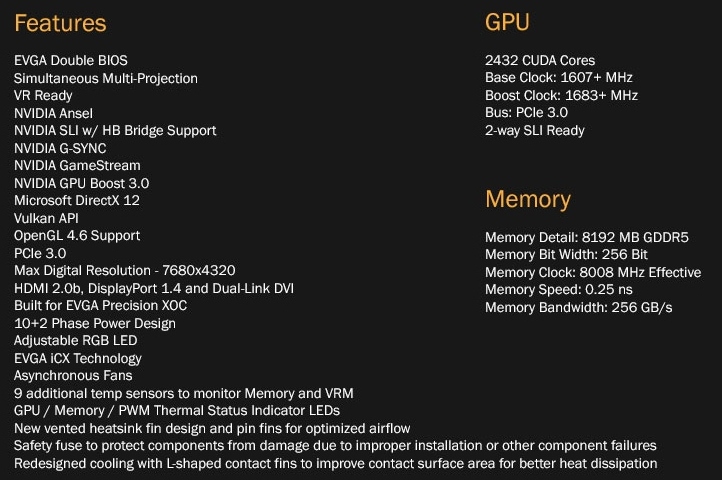 MacLeod
Good review. These are going for $510 right now in the states and at that price I don't see the point. The Strix 1070 Ti is $470 and that makes a lot more sense to me. It's an exceptionally good overclocking card with a great cooler and components. EVGA needs to drop the price on this card to make it worth it over a 1080 IMO.Quote
Reply