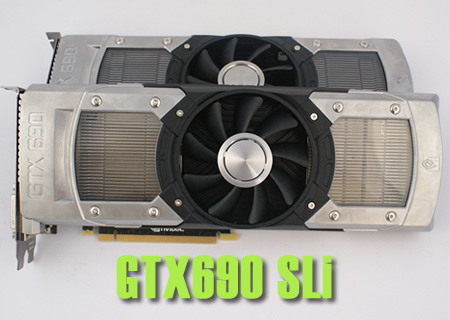 Putting two GPUs onto a single card started off as being a bit of a strange idea. After all, the performance of these cards such as the HD3870X2 or GTX295 could never get close to that of two single cards.

However as is always the case with technology, the R&D guys eventually worked out how to get very close indeed. The last generation, the HD6990 or GTX590, were both incredible performers, capable of chewing up nearly every game on the market and spitting out some incredible frame-rates.

Since the release of the GTX680 and the huge benchmark scores that it produced, we were eagerly anticipating getting our hands on the dual-GPU version of the latest nVidia core, and today we finally get a chance to discover if this gets even closer to bridging the gap between a single card with two GPUs, or two cards in SLI.

So pull up a chair, strap yourself in tightly, and let's see what the GTX690 and SLI'd GTX690's have to offer.

As you can see, the EVGA GTX690 has got some huge numbers attached to it. 3072 cores means we have two full-fat GTX680 cores on board, and the clock speeds haven't been heavily reduced either. This should lead to some very tasty scores indeed.

airdeano
thanks Tom, great insight on what is available and what possibilities these can provide.
the "overkill" was absolute nuts.. noted that the SLI config, the CPU scoring was elevated
from the single card tested. are you still attributing this to the simulation software?
don't think i'll be easing one , or like two into my system, but it was great to see them in
action. give that author a pat on the back!
one last was is there some validation that on these dual GPU card in SLI that the monitoring is
actual both cards, not just one card with two GPU? you had noted on the afterburner showing
dual fans on a single fan card.. just an observation...

d6bmg
How can it be described? Awesome among awesome configs? :P
Nice review btw.

fazmond
Quote:
yeah i have Quad sli 690's and you only showed the GPU1 and GPU2 not GPU3/GPU4 although unless only 2 gpu is manually selected then it should auto be on 4 cards anyways

iv always had the dual cards

AverageNinja
A single GTX 690, with a BENQ XL2420T monitor.
3D-Vision ready and 120hz. Should be awesome