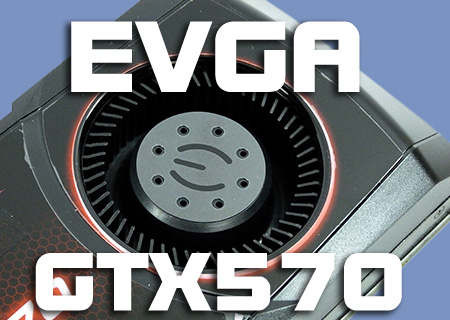 Tuesday saw the launch of the latest in the nVidia line of GPUs, the GTX570, and what a launch it was. If we were impressed by the GTX580 (and we were) then the GTX570 is even more impressive.

Normally cut-down versions of full-fat cards are lacking in a little oomph and require an overclock to really make them a worthy purchase.

By contrast the nVidia GTX570 was pretty hot out of the box giving great performance in all situations and quickly becoming a favourite amongst the OC3D team.

Thanks to the rather sudden wintery weather that's graced our shores our review of the first Partner card has been a little delayed, but thanks to some burning of the afternoon oil we can finally see what performance is available from the "off the shelf" versions. Today we're looking at the basic GTX570 from EVGA, a company that have been delivering high-performance nVidia cards for many a moon.

As you can see the card is identical to the version we reviewed on Tuesday, as we'd expect to see from a vanilla reference design. Rather than go over the information that you've just read earlier this week, let's move on.

Click to page two to see the EVGA in the flesh.

Mr. Strawberry
i want it lol

alienware
Love it. My fave sticker too haha.

Nice one VB. Was actually getting a bit concerned about where you'd been today, bit quiet..Quote

hmmblah
I really should be happy with my current cards, but the 570's are just so new and shiney!Quote

CH4PZ
Wow, excellent article as usual guys and interesting that it out does the supposedly identical ref design! when will we get to see a gtx 570 sli report? thats my plans for a couple of these, water cooled ;-)Quote

Stromatolites
See, this is why I hate new tech coming out. It just makes me want to spend money...Quote
Reply