In Ashes of the Singularity the game uses a Multi GPU rendering mode called AFR, which allows each GPU to work on every other frame in turn. This means that for both GPUs to work together the fastest GPU will have to work at the same speed as the slowest GPU, which in turn means that an Explicit Multi-GPU setup will work best if both GPUs are evenly matched.

Given that Explicit Multi-GPU allows any GPUs to work together, it is not recommended that you pair together GPUs with a vastly different amounts of computational power as the fastest GPU will be limited to the speed of the slowest GPU.

In the examples below I have paired together a GTX 960 or a R9 380 with a R9 Fury X, a GPU that is more expensive than both of these lower end GPUs combined. One thing to note here is that the R9 Fury X is CPU limited in this graph and is not operating as fast as it should, but these were the highest settings that I could get the GTX 960 and the R9 380 to run without hitting VRAM limitations.

We can see here that by adding an unsuitable GPU (one that has less than half of the computational power of the higher end GPU) will result in a performance decrease, as simply put the higher end GPU, in this case the R9 Fury X, will need to hold itself back to much for any performance gains to be possible as both GPUs need to run in sync. 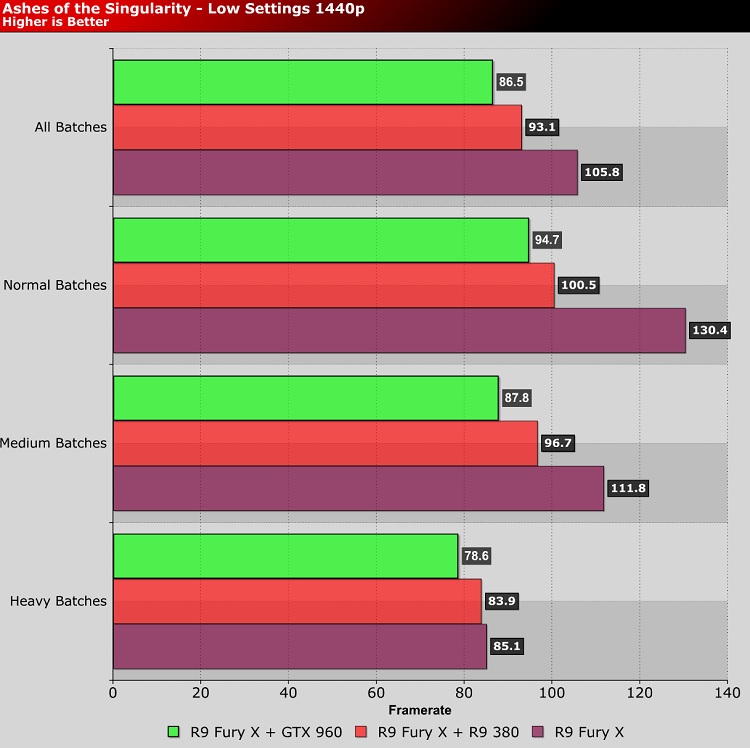 Tripp
Wow didn't think this would be allowed to work, I wonder how long until nvidia stop thisQuote

ImprovizoR
Quote:
I don't think they can. It's a Dx12 feature.Quote

WYP
The benchmark will go live to the public tomorrow, it would be a big deal if Nvidia removed a feature.

All Nvidia would be doing by disabling the option would be to harm consumers, though they will try to spin it in a positive way for them.

if they remove the feature myself and plenty of other tech writers will flame them for it, as removing a feature is bad for consumers.Quote

Tripp
Quote:
they have done it before though right? and Nvidia do genrally get away with a fair share of dodgy sh*tQuote
Reply