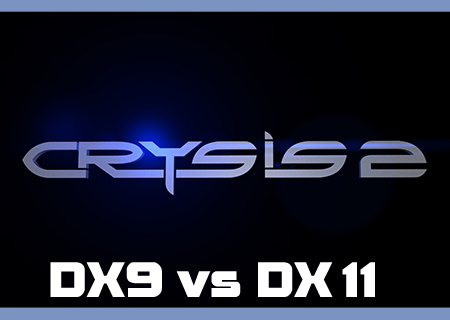 When Crysis 2 first appeared we were all a bit disappointed in the graphical splendour on offer. Crytek had, with the original Crysis, given us a taste of the future and brought plentiful eye-candy.

Crysis 2 though was held back significantly on PCs by its console roots. As the current raft of gaming consoles are now ageing somewhat the original engine only took advantage of the DirectX 9 featureset. Now though we have the v1.9 patch for Crysis 2 which enables DirectX 11 features and so it finally looks like a cutting edge PC Game.

As you can see there is a raft of improvements all designed to make the whole thing far more realistic with Tessellation enabling far greater detail and the adjustments to shadows and depth of field helping to put you in the game.

Obviously a High-Res texture pack and DirectX 11 features really up the ante as far as recommended specs go. Crytek now recommend a 1.5GB DX11 GPU, Quad Core CPU, 8GB of RAM and SSD. Quite a step up from the standard specifications but this is a huge step up in quality.

Let's grab a look at some screens. Starting with DirectX 9...

DiggyDiggyHole
Ok quick question. Would an Alienware M18x with the 2630QM and 2 GTX580m's be able to handle DX11 Max Settings?Quote

Dolph
Quote:
I think it's more than able. There are some benchmarks in this article: http://laptoping.com/nvidia-geforce-gtx-580m-laptop-video-card-announced-benchmarked.htmlQuote

But that is with AA off, but everything else maxed out. 25 FPS minimum is what I would consider playable, although personally I would prefer it never to drop below 30.

dugdiamond
well worth the wait... a few nvidia fanboys will be bragging about the FPSs for a long time