Using a wide range of performance tools has always been important when looking at PC hardware, as not every game performs the same and results from a single tool do not often deliver the full picture.

In the past Catzilla was a regular part of our GPU test suite alongside tools like 3DMARK and Unigine. Now AllPlayer's Catzilla benchmark has now been updated to support 4K, giving us a great excuse to place our GTX 980Ti and R9 Fury X head to head to see which GPU reigns supreme in the Catzilla benchmark tool.

One key thing about Catzilla is that the tool can be used to determine whether or not your PC is ready to play certain new PC games, with games like Far Cry: Primal, Dark Souls 3 and Fallout 4 being recently added to the list.

Catzilla is available for free or as a paid tool though free users will only gain access to the 720p gaming test. On the next page we will show you our results in Catzilla for 1080p, 1440p and 4K. 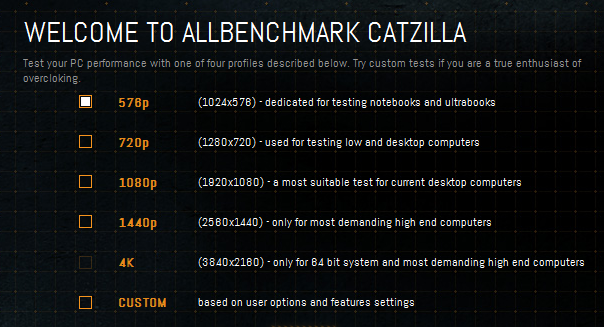 For this game, we will be using the newest drivers that were available when the game released, which is Nvidia's Game Ready Geforce 364.72 driver and AMD's 16.4.1 driver, both of which are the most recent GPU drivers for either company.

We will be testing this game on our dedicated GPU test rig using the current flagship GPUs from both AMD and Nvidia. Both GPUs will be the reference design and will be running at stock settings.

NeverBackDown
Why would you consider adding this to your usual benchmark tool? I'm sure with this benchmark a 980 could keep up with the FX. I don't see how it's not a Nvidia biased toolQuote

Wraith
Quote:
I know a few biased tools, doesn't matter which benchmark is used they will always be considered biased depending on the results.

Keep calm and carry on benching.Quote

WYP
Quote:
It would be interesting to see how architectural changes in the new GPUs will affect things.

I have reran the benches a few more times and think it varies a little too much run to run to be used properly, as well as the overall nvidia slant it has.

we only did test two GPUs and that is not really enough to know whether or not it is a worthy tool. I would be nice to have a little more than the usual 3DMARKS etc.Quote

NeverBackDown
Quote:
Not always, but when a benchmark shows a weaker card outperforming a card that is faster, you know it's not accurate. I can't find any results of the 980, but with how far behind the FX was I don't see how they couldn't be even or 980 ahead. Most benchmarks are Nvidia biased anyways, they just turn on as much tessallation as they can and Nvidia cards will always end up doing better. It'd be more realistic if benches used 16x tess as that is closer to real world application.


Quote:
Yes it will be interesting. If AMD can improve tess performance/get stronger Async Compute Engines/ and better IPC, that alone would be a big advancement.

Yeah with only two cards it's not enough to know. You can always get Unigene(heaven/valley)Quote