We've a little bit of a curiosity here at OC3D Towers, and we don't just mean the girl who makes the coffee. Usually when a item of hardware is replaced by something better it gradually slips down the price list until, eventually, the amount in stock is sufficiently low that the price stabilises. It's a bit like a footballer going from the glory days at a big club, to being an experienced hand at a middle ranked club, before eventually turning out for your local Sunday League side. Or, if you prefer a non-sporting analogy, an actor going from being the love interest, to the love interests parents, before ending up as "third drunk". In all those cases though the abilities haven't diminished, merely the audience has moved on to brighter things.

So what is that to do with the graphics card we have here?

Perhaps more than any other item of hardware, graphics cards have a very short shelf life. What was blisteringly fast two years ago is merely good now. That GPU you broke your budget to buy has been rapidly out-classed by better models at lower prices. It's the cycle of planned obsolescence.

With the GTX 1080 Ti turning up and monstering the GTX 1080 it is no surprise that we expected the GTX 1080 to slide quietly off into the history books. The unit cost is still pretty high so even the reduced pricing that naturally comes when a shop is desperate to clear their shelves isn't sufficient to make it a sensible purchase. It's a shame. What it really needs to put a bit of life into a GPU that's still very capable is the design equivalent of some cosmetic surgery, or even a new suit. And that is exactly what the ASUS Strix GTX 1080 11GBs is. A well worn design given a last minute face lift.

None of that preamble fully expresses why the Strix Plus is a curiosity though. Well it's curious because the thing we like best about it isn't its reason for existence, but rather a last minute dice throw. We'll explain. The first of the GPUz shots you can see is the OG Strix GTX 1080. 320.3 GB/s memory bandwidth running at 1251 MHz.

What the GTX 1080 11GBs brings to the party is some faster GDDR5X. With the Strix in OC mode we see 1388 MHz for a total memory bandwidth of 355.3 GB/s. Any increase in bandwidth is nice to have, but 130 MHz speed boost on the memory isn't exactly going to revolutionise the performance of the GTX 1080. Yes it will smooth off some of the rough edges, but it is very much an evolution rather than a revolution.

Below you can see the original GTX1080 OC first with its higher base clock and boost clock (plus practically impossible to get hold of because of it) and then below the newer 1080 11GBs but pay more attention to the memory speeds between the two rather than the core clock speed. Sadly we don't have the exact comparable model in the older version.

What is revolutionary about the Strix GTX 1080 11GBs? Click on dear reader. 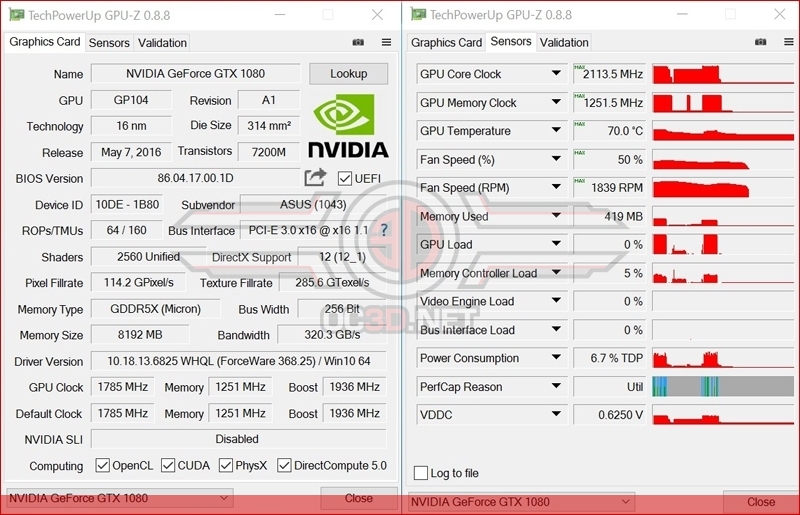 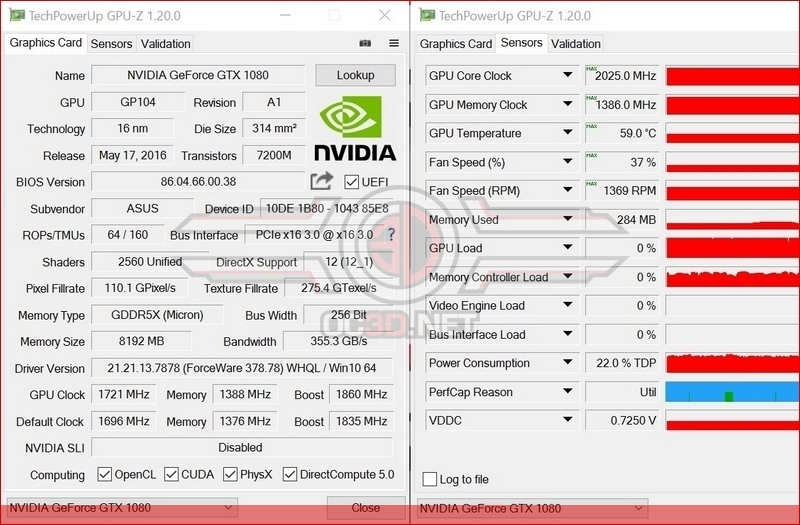 Kaapstad
Asus and NVidia are not exactly pushing the memory clockspeeds of these new cards.

Here is a Titan Xp, check out the default and overclocked memory speeds, this is with the full 12gb of memory too.

The memory bandwidth is not bad either.Quote

tinytomlogan
Have to allow for the silicone lottery - I agree though there really isnt a huge amount to talk about hence the lack of tests - cooler was good though!

Ill not be spending time on any othersQuote

Kaapstad
Quote:
It is still an interesting card though, unfortunately most people are focusing on the 1080 Ti these days and overlooking cards further down the range.

Your mini review was still an interesting read for me though, it is just that with a premium card like the Strix I would have thought that Asus could have gone a bit higher on the memory speeds.

It is also good to see the card come with an improved cooler and lower temps are always welcome.

If there had not been so much going on at the moment with new GPUs and CPUs just about to launch I may have been tempted to get one of these new Strix 1080s as I already own a Strix 1060 which I really like.Quote
Reply