Although there have been some isolated reports of issues with some of the early RTX 3080s it's still a supremely impressive card with plenty of performance at a very effective price point. When we first looked at it we were running on pre-launch drivers and many games hadn't yet patched themselves to fix what few compatibility issues there might have been. As with all major launches though those areas have quickly been ironed out, so it's time to take a look at a card which promises to be one of the biggest sellers, the ASUS RTX 3080 OC Strix.

The Strix has been a top seller in all it's various forms for a long time as ASUS have perfectly targeted it at gamers who like a little flash and flair to go with their performance, and the GPU cooler in particular has found itself on many models. If anything it was a little bit long in the tooth. It's not the familiarity breeds contempt, but when you're spending a thick wedge on a brand new product you don't want it to be indistinguishable from something that has gone before, so it isn't a surprise that ASUS have returned to their drawing board and brought out a new cooler for the newest Ampere card.

It is available in two models, and we have the faster OC edition up for review today that comes with three different speed profiles. Enough preamble, let's get down to business.

Quite often when you cast your eye over a manufacturers specifications it's easy to see the important numbers - clock speed and/or price - and ignore all the rest because it's no different from any other specification you've seen.

In the case of the ASUS Strix there are two key bits tucked away further down the list, namely that they recommend you download the software too. We're not big fans of needing software for a graphics card, but in the case of the Strix we'll make an exception as it unlocks a chunk of extra performance from the card as you'll soon see. Secondly, as you'll see in our photos, this is a monster of a card, significantly longer than an EATX motherboard at over a foot long. Those with tiny cases need not apply. 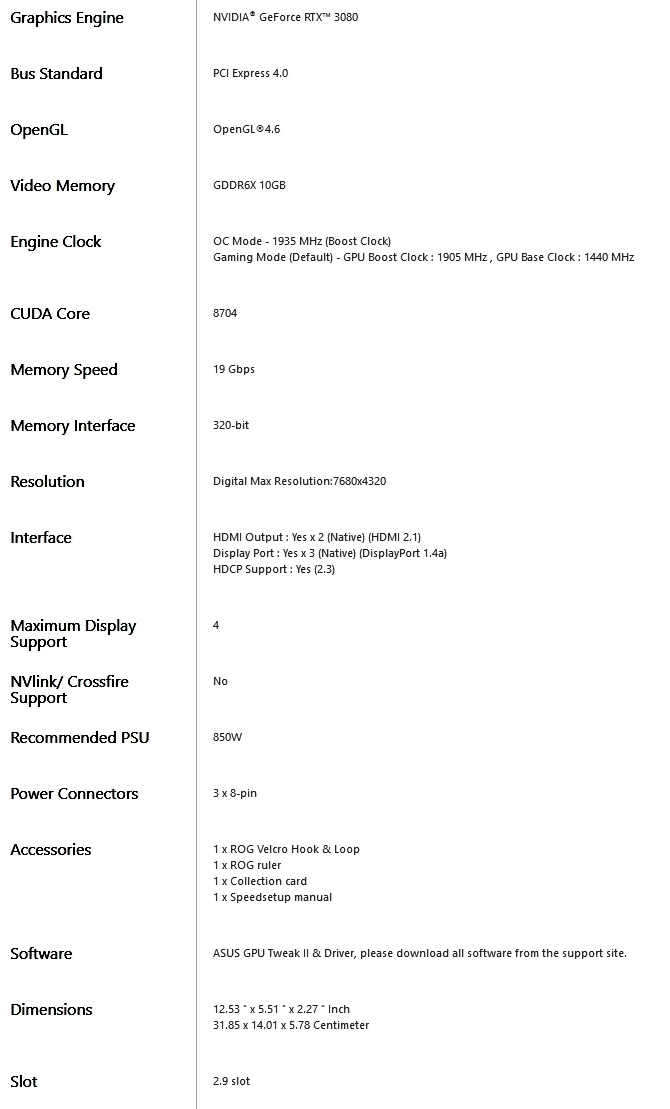