Festive seasons might be upon us, but business never stops. We don't think that we're giving away too many secrets to suggest that the AMD Radeon GPU was in the doldrums for a little while. Versions came and went without them really challenging nVidia for a position in the systems of people who just wanted the best bang for their buck, rather than people who were beholden to a particular brand.

Unlike the 380 that preceded it, the Fury range showed that AMD were finally heading in the right direction, and with the release of the RX Vega they went from 'decent if you like AMD' to 'absolutely worth buying whomever you are'. Both the 56 and 64 proved themselves are very capable cards. If, like us, you're always seeking to maximise your systems performance with the minimum possible outlay then the Vega 56 is a seriously tempting option.

Keeping things simple they have taken the RX Vega in its 56 guise, applied the DirectCU cooler with its awesome cooling ability and RGB lighting, and breathed on it to bring some additional clock speed to the table. Let's find out if the Strix RX Vega 56 continues to challenge the heavy hitters.

The primary reason you would buy an ASUS Strix is the excellent DirectCU cooler which is amongst the finest around. If you're looking enviously at the factory clock speeds then you'll very much enjoy our overclocking section today, which demonstrates that even the most modern cards can benefit from a little manual fettling. 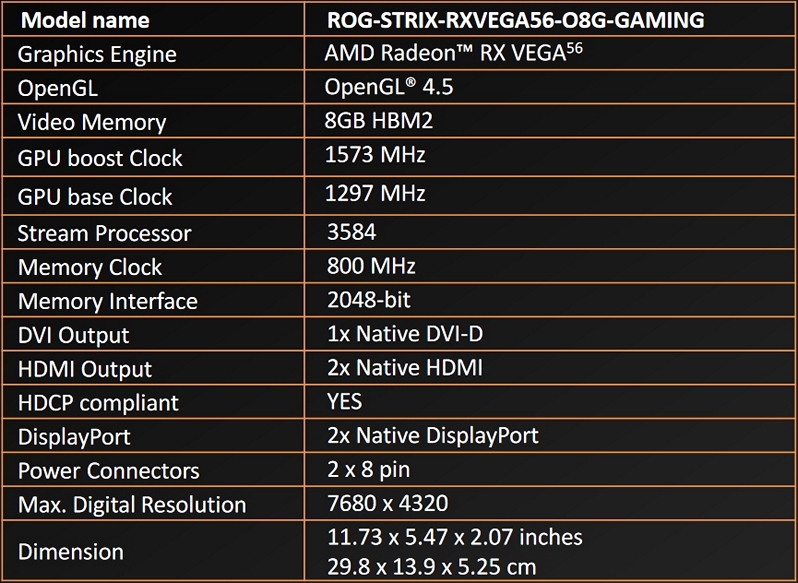 looz
Seriously tempted to buy a Vega 56 solely because of Freesync - saving 100€+ on the monitor is kind of a big deal.Quote

NeverBackDown
Wow those temps and power draw results are seriously interesting! AMDs stock profiles are trash. Interested to find out other peoples OC results. Because if this is consistent then AMD are really making themselves look worse by running more hot and consuming more power than they need.

Also I really want to suggest testing in DX11 for Warhammer 1 and 2. DX12 in that game is very very inconsistent and more often than not worse performance even with AMD. It's hit or miss with AMD and definitely does worse on any Nvidia card.Quote

Ir3555
The cons is that the top MOSFET is still not fully covered by the cooling plate of the heatsink, resulting in extremely high vrm temp on that area just like what guru3d has shown on its vega64 strix review.Quote

AngryGoldfish
If there is ever anything for a gamer and enthusiast to be interested in with Vega, it's what Tom has done here. 65°C at 1600Mhz is excellent. Power consumption is high, but if temperatures and performance is consistent and good then it's not a deal breaker for the majority of PC enthusiasts. Performance still isn't great when compared to the 1070Ti, but it would be a fun card to tweak. It's largely not worth it considering its current £560 price tag (that's what I paid for my faster 11Gbps GTX 1080), but it would be a fun project for those who have a lot of money to spare and are more interested in tweaking than gaming. Vega is more of a passion project than a good all round gaming card.Quote

MacLeod
Asus is really knocking it out of the park lately with their Strix cards....hell their Strix motherboards too. I've always been an Asus fan but they really just seem to be upping their game lately.Quote
Reply