With the recent launch of the Turing GPUs Nvidia took the usual improvements in performance that one expects to find on the next generation of technology, and apply all that power towards higher framerates. So far, so typical. However, the RTX range also gained two really useful bits of unique hardware. Those were the RT Cores which were dedicated ray tracing cores that handled light and totally wowed us with jaw-dropping visuals in everything that took advantage of them, and Tensor Cores which utilised a form of AI to enhance the supersampling and improve antialiasing performance without actually costing you those vital frames per second. In fact, the Tensor Cores - named after the mathematical tensor geometric objects which map vectors to scalars - have so much latent calculative capability that offloading your supersampling to them via Nvidia's own DLSS improves performance when compared to having no supersampling at all. A massively impressive feat.

All this hardware does come at a price though. The current base model RTX 2060 is very affordable starting at around £330 for the most stripped down version, moving up to £430 for the various partner vendors all-singing and dancing models. Still, at this end of the market when budgets are tight, twenty or thirty quid here and there can make all the difference. Enter the GTX 1660Ti. A card which is intended by Nvidia to replace the GTX 1060 by utilising the latest Turing GPU but dispensing with the Tensor and RT Cores.

The key features of the Turing GPU on the GTX 1660Ti are greatly increased Floating Point Operations Per Second (FLOPS, measured in TeraFLOPS), an equally large buff to the regular Integer Operations Per Second (TOPS, Tera again), and perhaps most importantly the ability to handle TOPS and TFLOPS at the same time. Previously on the Pascal architecture, the GPU could perform one of these tasks at once. For example, something that had 38 Integer calculations and 62 Floating Point calculations per 100 instructions would require a full 100 instructions worth of time to execute. Now, with the concurrent capabilities of the Turing GPU it can handle Floating Point and Integer calculations at the same time, thus taking only 62 instructions worth of time to calculate them all. Still with us? The long and short of that is that it's much quicker than it's Pascal predecessor. Faster calculations equal higher frame rates. 1.5x quicker to be exact than the GTX 1060 to be exact.

It isn't just complicated architecture improvements that the TU116 GPU scores over the GP106. Boost clocks are improved, Memory bandwidth has stepped up from 192 GB/s to 288 GB/s, and a whole host of extra CUDA Cores are available, now 1536 up from the 1280 offered on the GTX 1060. To fit all that onto a PCB the manufacturing process has reduced from 16nm on the Pascal to 12nm on the Turing, whilst the transistor count has blossomed from 4.4 billion to 6.6 billion.

We have three different models in for review at launch, the two premium models from MSI and ASUS, the Gaming X and Strix, which are very much at the high end of the GTX 1660Ti cost, and a baseline model that shows how affordable the GTX 1660Ti can be if you don't want any bells and whistles.

Let's take a look at what the ASUS ROG Strix GTX 1660Ti brings to the party.

As you would expect from a model bearing the famous ROG branding, and the always excellent Strix sub-brand, the GTX 1660Ti Strix comes with a lot of bells and whistles. As well as RGB lighting and their DirectCU cooler, there are two BIOS options, OC Mode and Gaming Mode. We know most of you will want the higher clocks of the OC mode, but the way that Nvidia's GPU Boost 4.0 technology works these days is so good that we're fairly sure the lower noise of the Gaming mode will suffice. But let's take a closer look at the cooler before we move on to the card itself. 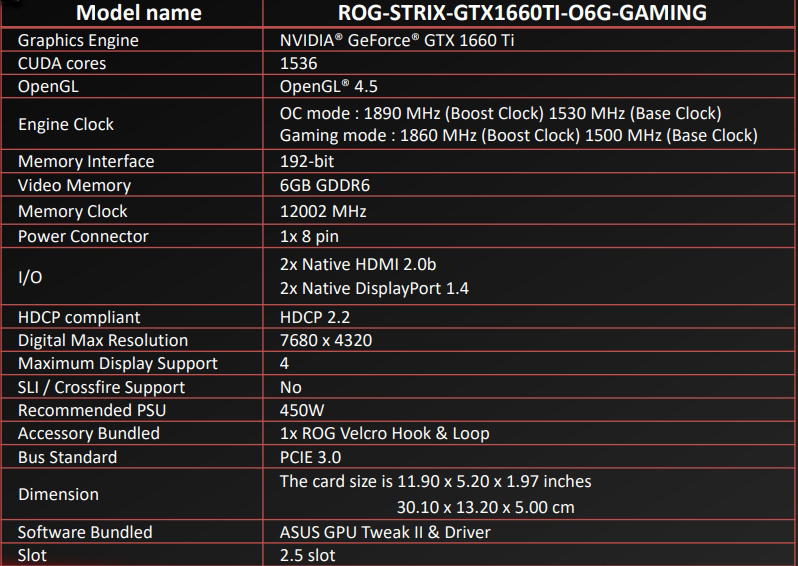