If you've been following along with our build up to the release of the GTX 1070 Ti then you'll probably have come here from our review of the reference nVidia Founders Edition that went up on the website today alongside this one.

So far we've discovered that it is extremely close to the full GTX 1080 and, depending upon which title you choose to play, somewhere between the Vega 56 and Vega 64 cards. With a very competitive price tag and great performance under the hood this is another one of those high end graphics cards that doesn't require the sale of your firstborn to purchase and should fly off the shelves.

Whilst the nVidia Founders Edition is the baseline for all future GTX 1070 Ti models, we know that the majority of people tend towards purchasing a card from one of the partner vendors rather than directly from nVidia themselves. When it comes to partner cards the current big seller is unquestionably the Strix range from ASUS. Which nicely leads us to today's review.

Oh look, it's the ASUS Strix GTX 1070 Ti. Triple fan DirectCU cooler, RGB lighting, overclocking potential, it's everything you expect to find on an ASUS Strix product. If you'd like a little look further in depth then we shall direct you towards our preview of this very card. If you're just here to find out how it compares to the nVidia Founders Edition then let's get down to business, but not before a quick overview of the specifications.

We've mentioned it before but it is always worthy of repeating, the GTX 1070 Ti is based around the GP104 GPU that is found at the heart of the GTX 1080, except whereas the GTX 1080 had 2560 CUDA Cores the 1070 Ti has just (?!) the 2432 CUDA Cores at its disposal. Which largely explains why the performance of the two cards is so similar. Having seen how the reference Founders Edition does we're intrigued as to how much nearer to the GTX 1080 the overclocked ASUS Strix manages to get, so without further ado let's look at some boost clocks and then fill your world with graphs. 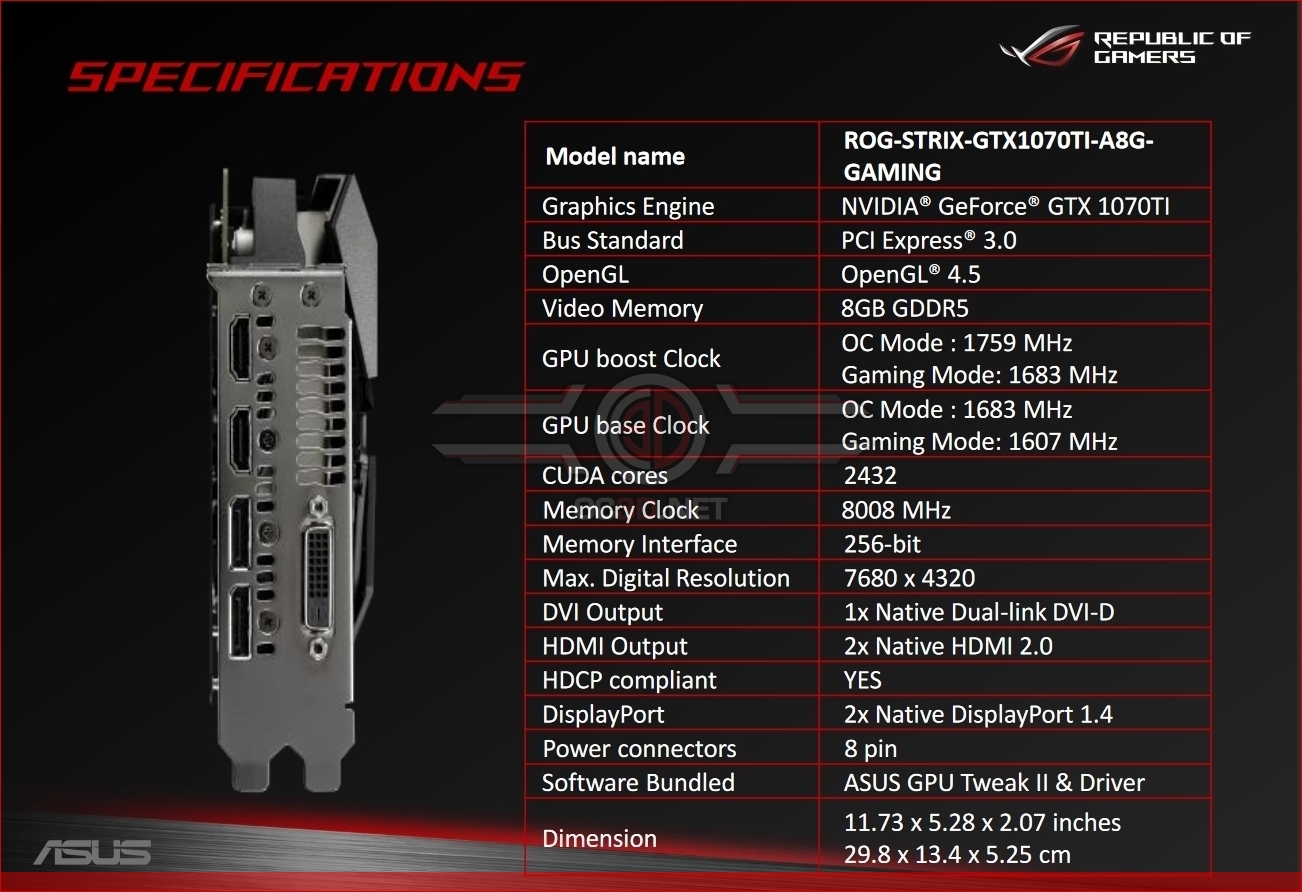 AlienALX
Blimey now that's more like it ! thanks Guv !Quote

AngryGoldfish
I feel like there's something wrong here. In multiple benchmarks (Hitman, GOW4, Ashes) the 1070Ti Strix is beating the 1080 Strix. How can that be? I think you might need to retest some of these as something is obviously weird.Quote

AlienALX
Quote:
Drivers maybe. When the 1080 came out it wasn't that hot in DX12. You also need to remember, the 1080 has been out for a long time now, and drivers will absolutely no doubt have improved since.

Well, unless Tom tested them all again for the review.Quote

AngryGoldfish
Quote:
This is a big issue with video card benchmarks in my opinion. Instead of having the most up-to-date information for each review (within reason), we have to cross-reference the data with another review of a more up-to-date card. So in this case I'm using Guru3D's review of the 1070Ti. I've gone to the Hitman benchmark, and instead of using their supplied graphs, I provide my own. As in, I take a more recent GTX 1080 review posted by them a couple of months ago and compared the two cards with that data rather than the original 1080 review from mid-2016. At 1440p, the 1070Ti scored 100 FPS in Hitman, while the 1080 scored 114 FPS. That's more indicative of what most people should be seeing. I did the same with GOW4 and the 1080 was 13% faster than the 1070Ti. Again, a more expected and accurate result.Quote

I didn't expect the Ti to beat the 1080. We all knew it wouldn't really. It was just to make the higher mid range cheaper. The 1070 IMO is starting to creak and show its age now, not being any faster than the old gen high end. We needed something just that bit better.

Tis a good release by Nvidia, I just hope the prices are right.Quote
Reply