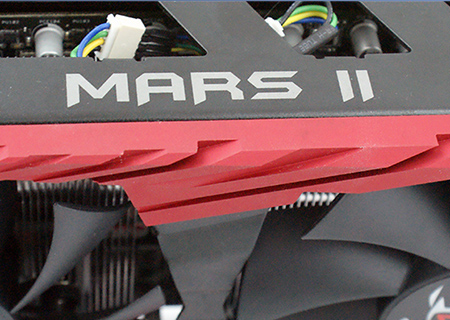 The successor to the original mental card, the MARS, has been a long time coming.

Back when we first previewed it over a year ago it was a twin GTX480. Since then not only have we seen a twin HD5870 nutter called the ASUS ARES, but equally the GTX480 didn't exactly endear itself to either the public, or those who have to keep the things cool. ASUS, never one to rest upon their laurels took the brave, but wise, step of going right back to the drawing board and designing a card that took advantage of nVidias rapid update.

So now, after much gestation, the MARS 2 is here and in its final form it comes bearing two GTX580s, the far cooler/quicker evolution of the Fermi GF100.

Of course a card with this much power has to be released under the Republic of Gamers branding and with a suitable £1000+ price-tag. The question is, how good is it?

As befits a card with eye-opening capabilities, the twin GF110 GPUs are backed up by 3GB of GDDR5. Otherwise it's fairly standard stuff, if the combination of two GTX580s on a single board can ever be considered standard.

Let's get a good look at her shall we.

Excalabur50
Watched the full vid today GREAT review as always nice card if you got money burning a hole in your pocket.Quote

Sgt.Bilko
Thanks for a good and thorough review.

Agreed preformance is disappointing but I think the damn thing looks like it's been in a fender bender with that 3 slot grill and the sloping fan cover. It just looks wrong.Quote

Solidarity
I have not watched the videos yet, but I did skim read the written review. Saw the price, and realised this card is more expensive than my entire rig. If I was the type of person who had enough money to just throw around, I still wouldn't get this card.Quote