If you only believed the best technologies were the ones that companies were producing then you could be forgiven for believing that 3D was the next big thing. For a time there manufacturers were falling over themselves to wave feather dusters in your face and attempt to convince you that sitting at home with an extra pair of glasses on, in a particular position was exactly the way that everyone wants to consume their media.

We, of course, know this to be rubbish. High definition pictures are the kings of quality media, and ultra high definition, 4K, is the current cream of the crop. There might be a dearth of media in that format, but the trickle is gradually becoming a flow and with 8K screens in R&D labs it's obvious that even the manufacturers know that image fidelity is the way forward.

To that end we have the ASUS ROG Swift PG27AQ, a 27" 4K monitor that supports nVidias G-SYNC technology to give you the smoothest frame rates without image tearing.

Impatient readers might have already cast their eyes to the top of the page and seen the low price of the PG27AQ. In fact this is a 4K monitor for the same price as the previous 1440P Swift. With the knowledge that this is much cheaper than we might have expected, the fact it's an IPS panel is definitely the icing on the cake. We particularly like the inclusion of a non-glare coating on the screen, something that television manufacturers would do well to take on board. 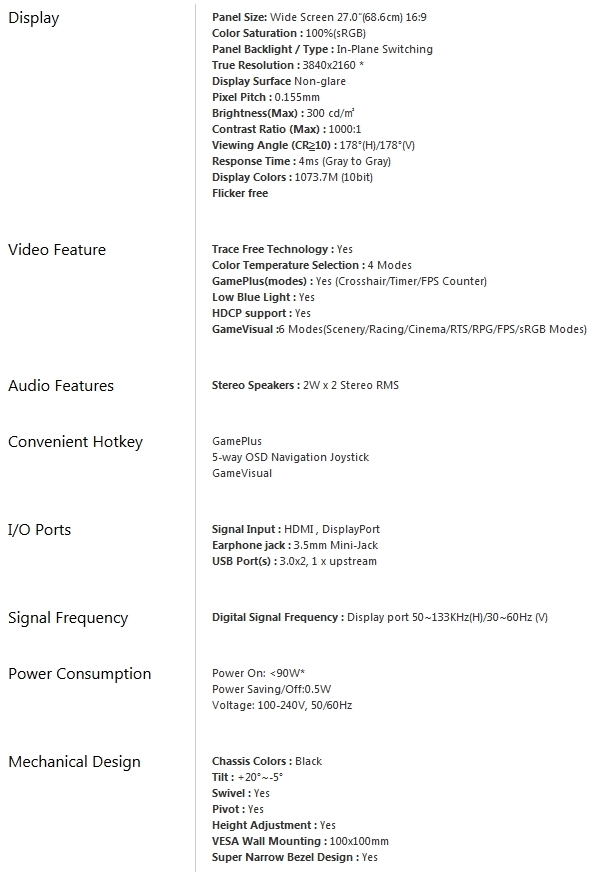 darthgalactis
Still patiently waiting on the ROG PG348Q from Asus.

AlienALX
IMO Asus have released this too soon. Maybe they should have waited for Pascal....

Also, whilst I accept that it's probably nice quality the asking price is plain daft. You can get an Acer with pretty much the same spec for half the price. Not only that, but it's 60hz, which once we do get the graphical power to run 4k properly will soon be left in the dust for higher frequency models.

tinytomlogan
Quote:
The Acer one isnt half the price and I actually have one. Its great on paper4 but the Asus image and build quality is much better,

60Hz is actually a display port limitation on 4K so right now you cant go higher.Quote

JR23
With the G-Sync IPS 4k Acer at £690 I think it's a sensible place and time to bring it in. People will pay a premium for ROG products and rightly so, already they have an excellent reputation for high quality gaming panels. I guess the IPS factor will open it up to a wider audience although it's not something that bothers me in this kind of product, had it been a little faster and TN I think that would be the right tech for the market audience however more difficult to justify the price to all the FB trolls who think they are pro photoshop.

For those with a beastly GPU set up this has got to be the thing to have. I would be raging for my paycheck to come in if it was a 32". I still think 4k is wasted on 28", definitely 27" and so it doesn't really do much for me personally, I can't understand why the market is pushing for small 4k panels. It's going to take something very interesting to strike the UP3216Q from the top of my wishlist. Perhaps the 32" G-Sync Acer is it, have to admit I would prefer it coming from ASUS though.

tinytomlogan
I think 4k 30-32" would be spot on aswell although youd need a REALLY deep desk!