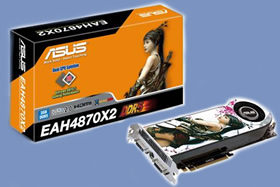 Generally for a new GPU release we'd go full out on an introduction, spending lots of time talking about the card, its features, some of its predecessors etc etc. But now, a few weeks after the official release of the 4870X2, we are going to assume that you've pretty much gained a degree in the card having read all the ins and outs of its architecture and just want to get straight down to the nitty gritty results.
Of course, to sum things up for those of us who may not have been following the launch of AMD's latest and greatest, the 4870X2 is essentially two RV770 (HD 4870) GPU's slapped on a single PCB and coupled with a rather tasty 2GB of GDDR5 memory. Designed to lock horns with NVIDIA's current  flagship card - the GTX280, the 4870X2 may be lacking some of the finesse of a single GPU solution - but will it get the job done?
Today we're going to be looking at the ASUS EAH4870X2 and placing it head-to-head with a reference NVIDIA GTX280 in both the performance and price stakes. However, before we get down to the good stuff, let's take a quick look at the specs of the card from ASUS' recent PR release:

"Graphics cards with high performance and exceptional speeds are never far from the gamer’s mind. That is why ASUS, producer of top quality graphic solutions, has today introduced the graphical solution for the latest generation of AMD dual RV770XT GPUs – the ASUS EAH4870X2/HTDI/2G – equipped with double GPUs and a massive 2G of on-board memory. Additionally, the ASUS EAH4870X2 TOP will be released soon with impressive performance results to provide superb gaming performance; and both the ASUS EAH4870X2 TOP/HTDI/2G and EAH4870X2/HTDI/2G are slated to be upgraded soon – with both cards being equipped with a specially designed fansink for efficient heat dissipation.
In line with the Rock Solid promise of high quality from ASUS, the second versions of the EAH4870X2 Series will come with several solutions to provide top quality graphic performances. These upgraded graphics cards will utilize a specially designed fansink to effectively dissipate heat away from both GPUs – enabling much more stable performances in comparison to reference designed single fansinks*. In addition, they will also be equipped with an EMI shield, which reduces EMI Interference by 66% for more stable signals; and DIP Spring Chokes will lower temperatures by 5~10°C in comparison to traditional Toroidal Coil Chokes. Furthermore, the LF PAK MOS guarantees more efficient power and less heat production; and on top of all this, Japan-made polymer capacitors will lower power loss for more stable operations. "
So there we have it! Now let's press on with the review..
«Prev 1 2 3 4 5 6 7 8 Next»

I want, but dont needQuote

!TIMMY!
Great review Jim, and good to see that AMD are continuing with the good price performance ratio.Quote

Hassan
nVidia u can kiss my @$$Quote

tinytomlogan
Tis an awesoome card, wonder what difference the extra cross bridge will make when enabled in the drivers.

Sweet review mate, glad you updated the testbed and went with the QX, whoever suggested that is clearly awesome