It is not often that we look at a new, non-reference GPU with such enthusiasm, but the ASUS GTX 980Ti Strix is certainly a GPU which has our full attention. With a beefy factory overclock and a cooler to match, this GPU may indeed be something very special.

When we first looked at Nvidia's reference GTX 980Ti we were amazed at how much performance was available on the chip for it's price, it simply made Nvidia's GTX Titan X redundant in all but the most extreme of circumstances. One thing that we noted with out GTX 980Ti was that there was a great deal of potential which could be unleashed from overclocking, with ASUS's GTX 980Ti Strix we already have this performance out of the box, beating the maximum overclock of our Nvidia Reference GTX 980Ti achieved right out of the box.

This GPU holds a monster of a factory overclock, with a base clock speed of 1216MHz and a boost clock of 1317MHz when operating on the GPU's OC mode, leaving this GPU with a reference clock speed which is over 20% higher than on Nvidia's reference model. The memory on this GPU also receives a bump of 200MHz, giving this GPU a memory clock speed of 7200MHz, which will certainly help us play games at higher resolutions. 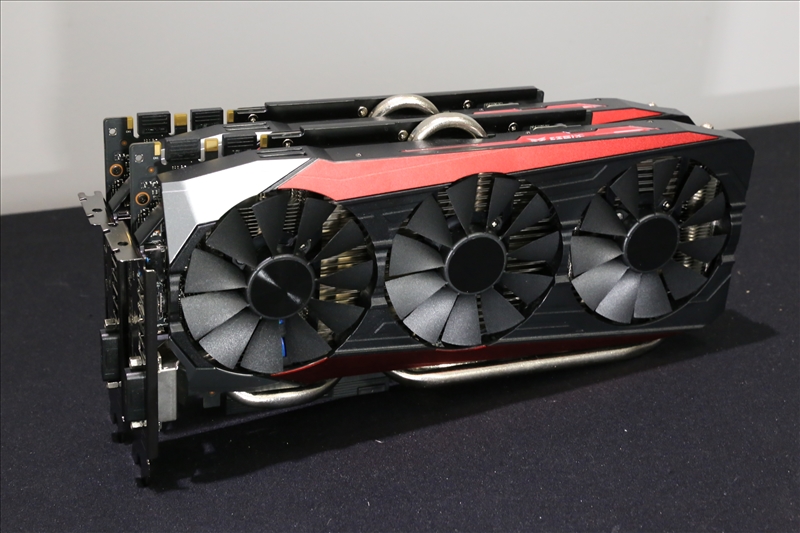 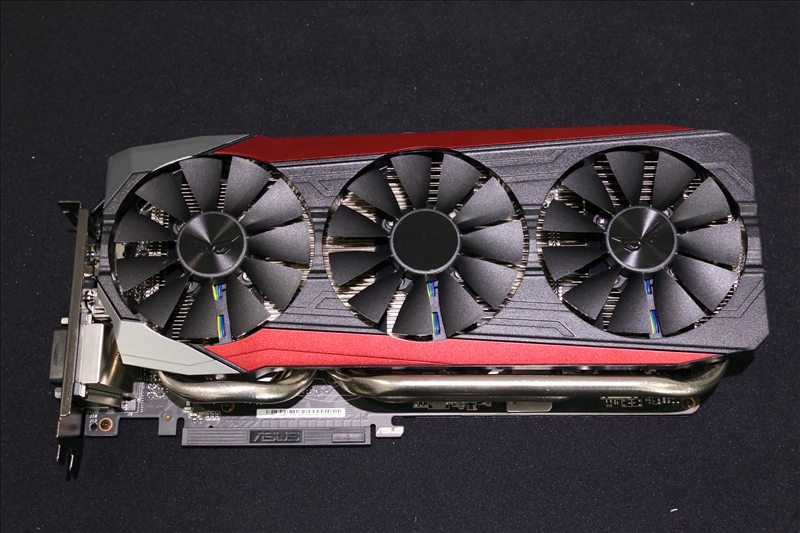 When we first took our ASUS GTX 980Ti's out of their boxes we were amazed by the sheer size of the GPU, with a PCB which is both taller and longer than Nvidia's reference PCB. The dimensions of this card are 305 x 152.2 x 39.8mm, which makes this card a dual slot GPU, which is becoming an increasingly difficult feat as GPUs become increasingly more powerful.

The GPU is cooled using ASUS' new DirectCU III Cooler, which is cooled by 3 of ASUS' Patented Wing-Blade 0dB fan, which offer 105% more air flow than traditional fans and are even able to turn off at low temperatures and loads, which is no small feat given this GPUs staggering reference overclock. ASUS say that this GPU will be 30% cooler and 3x quieter than Nvidia's reference GTX 980Ti, which is something which we will be putting to the test at a later.

One thing to note is that this is the first GPU that will use 2 10mm direct contact heatpipes, which alongside ASUS' 3 other 8mm heatpipes which should be able to keep this GPU nice and cool. 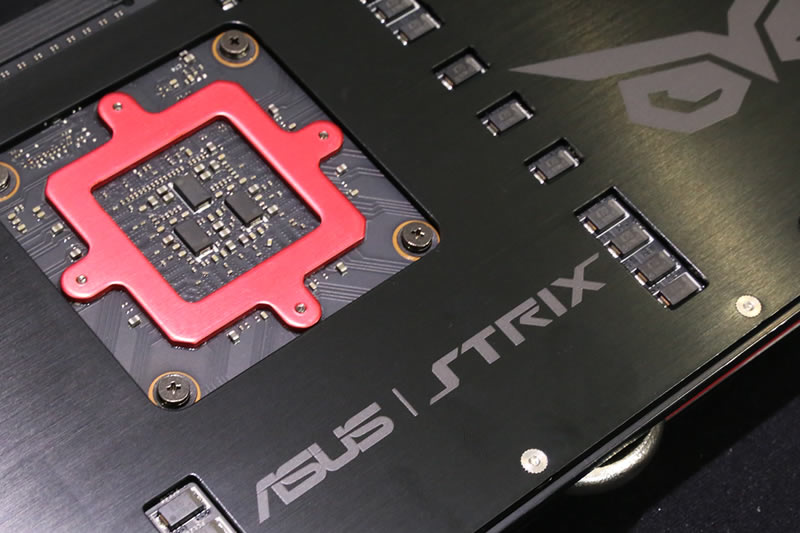 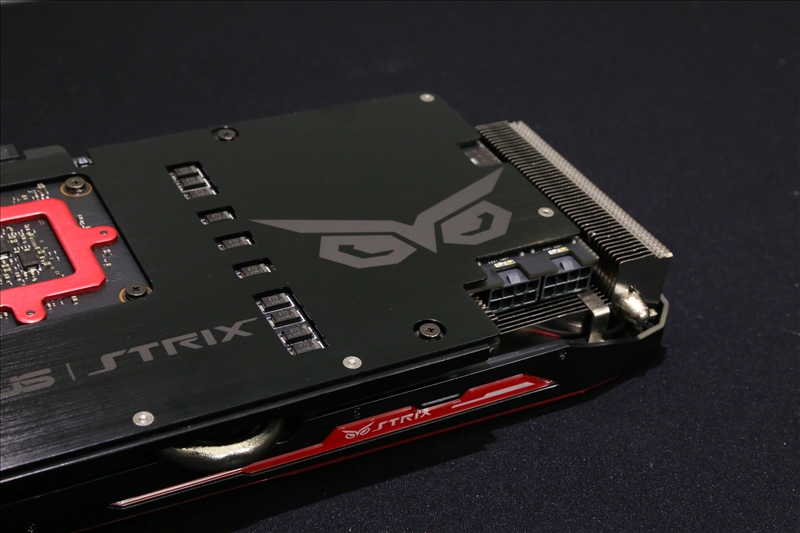 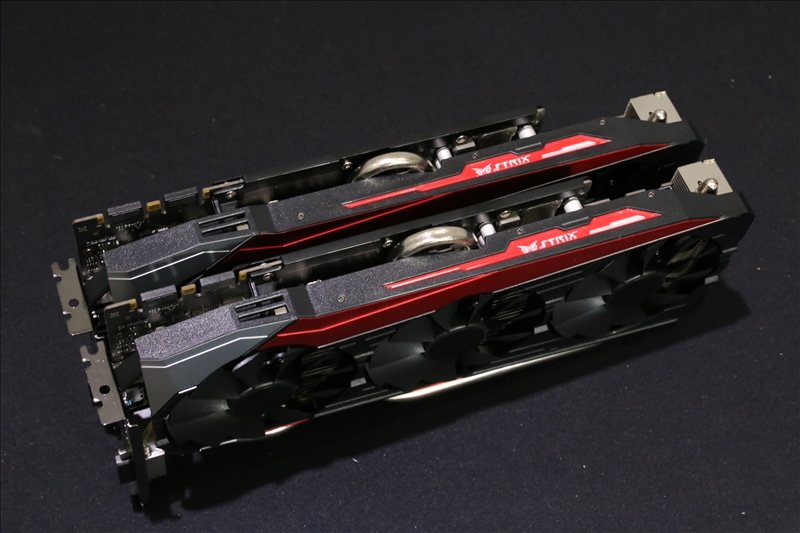 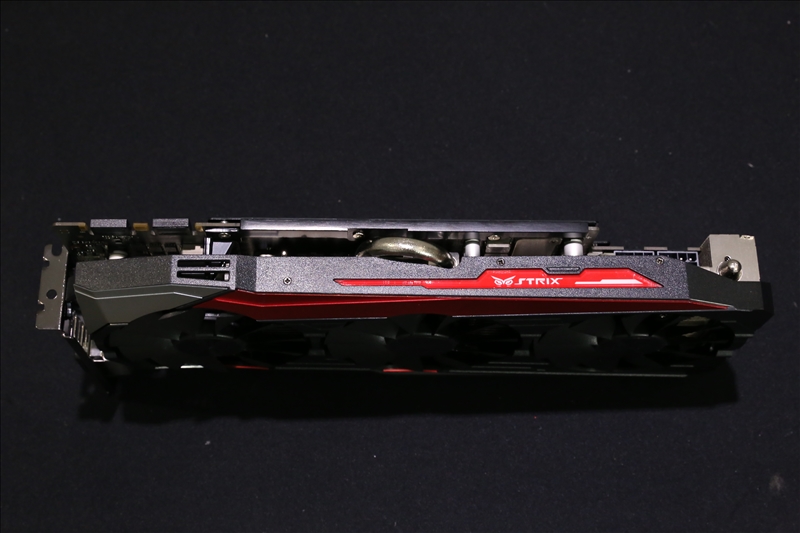 As we move on to the back of the GPU we are greeted by a nice brushed metal backplate, which has an aesthetically pleasing ASUS Strix logo and an eye-catching Strix GPU fortifier, which combined with the GPUs reinforcement frame is designed to protect the GPU and PCB from bending over time.

Moving to the side of the GPU see that ASUS has went for a more sleek and refined design than they typically do with the Strix Series, revealing a nice thick Nickel coated heat pipe and a ASUS Strix logo which is illuminated with a white LED that pulsates with system load, giving the logo a nice subtle glow. 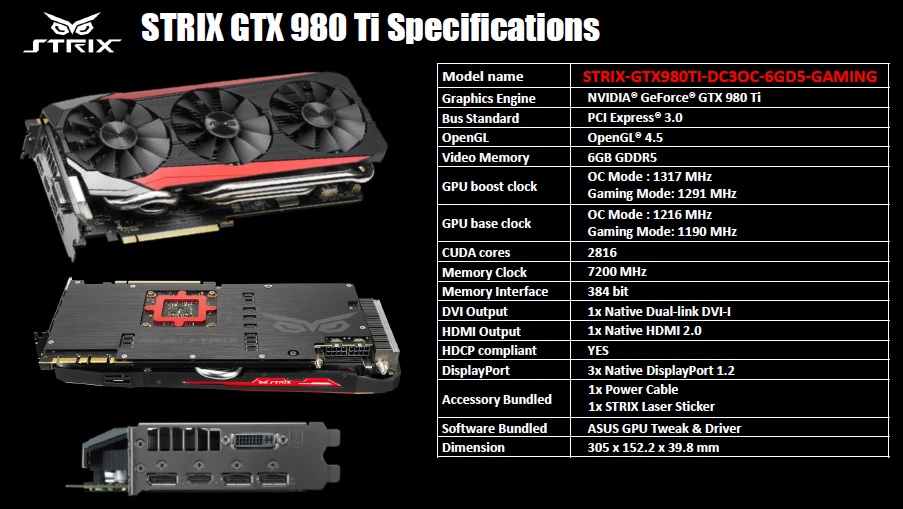 Alongside this GPU purchaser will also be given years subscription to XSplit Premium, which is a licence which is worth $99, which is fantastic if you are looking to steam your games to Twitch or YouTube.

What ASUS is providing here is a GTX 980Ti which has a full scale overclock right out of the box, offering clock speeds which are over 20% higher than Nvidia's reference GTX 980Ti, which should mean that this GPU will offer mindblowing performance in games.

With ASUS's new cooler design, which uses 5 Nickel coated direct contact copper heatpipes and 3 of ASUS' new Wing-Blade fans brings with it low temperatures and quiet operations, even with this GPU's beastly factory overclock and the GPU remains under 2 slots in height, meaning that it would be ran in Quad-SLI if you were crazy enough to build that kind of configuration.

We have 2 of these GPUs sitting in the office at the minute, so expect to see and SLI review of this GPU coming within the next few days.

You can join the discussion on ASUS' GTX 980Ti Strix on the OC3D Forums.

Tripp
Not a fan of the red at all :-(Quote

AverageNinja
Absolutely loving the look of these! The backplate looks great too imo, especially the red support bit.Quote

Dicehunter
Too much red for my liking TBH, Would have been nice if they stuck with the stealthy black look.Quote

goldjoee
TTL is there anything properly cooling the memory on this card?Quote
Reply