Just like the X99 motherboard we reviewed a couple of weeks ago, the Strix packaging dispenses with the common red ROG theme to emphasise how the user has full control over the colour scheme of their hardware.

The fan design, here the DirectCU III model, has 105% more air pressure than previous models, helping shift that limiting heat from your card at an even faster rate. By including GPU controlled fan headers you can relax knowing that your card will be kept running at peak performance, no matter the loading. 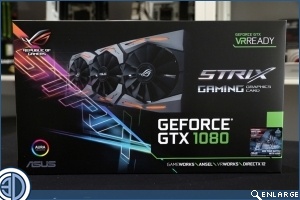 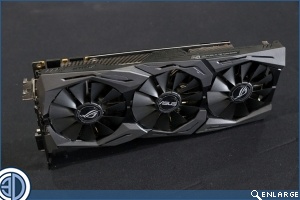 We've spent a long time shouting at manufacturers to make better use of their backplates, and it looks like they are finally listening. So much attention is paid to the fan design which, in a standard tower, you never see. Why not do something with the bit you can actually notice? The Strix comes equipped with a ROG logo which you have complete control over. No longer do you have to endure a particular colour in your system. Now you're free to pick anything from the spectrum that takes your fancy. 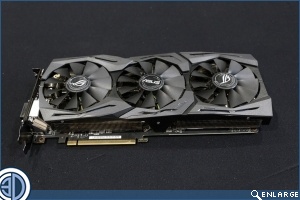 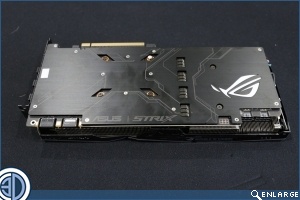 The days of a triple-slot cooler are thankfully long behind us as the combination of better quality heatsink designs and lower energy GPUs has greatly reduced the heat output of our favourite hardware.

Should you be rich and/or demanding enough, you can always pair up two GTX 1080s into SLI. Given how few of us have either the requirements nor finances for such a venture it's nice that the Strix has them covered up by default. 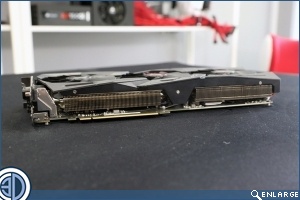 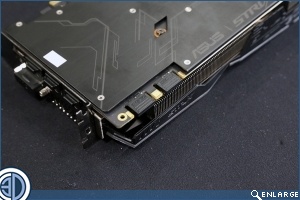 The Founders Edition GTX 1080 utilised a single power input, but with two extra fans to run, improved power technology and the AURA lighting, it is understandable that the Strix is equipped with a 6+8 arrangement.

Removing the cooler gives you an indication of the level of detail that lies buried beneath the DirectCU III heatsink. The power phase has seen a significant overhaul with 8+2 Phase Super Allow Power II tech used throughout. The SAP II Capacitors have more than double the lifespan of the regular type, and utilising SAP II Chokes should finally banish the possibility of your graphics card squealing to the history books. 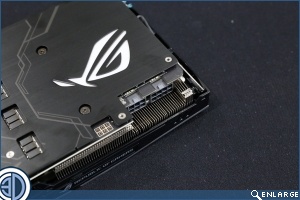 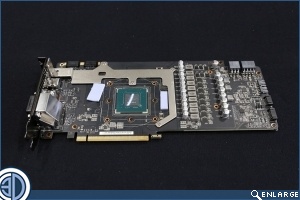 If, like us, you're a fan of heatpipe art then the DirectCU III cooler should definitely float your boat. Compressing so much cooling area into such a small space takes some serious design chops, particularly when you see how small the Pascal GPU is. Very impressive. 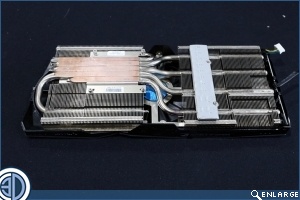 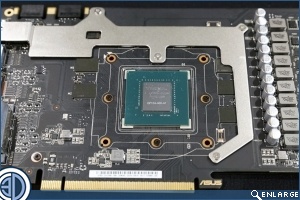 tolagarf
I have to say I'm impressed! Right from the beginning I was very negative about this card due to the issues with the 980 Ti version with the sagging and the cooler design. It seems ASUS fixed that with this version and the 2 x PWM headers are a godsent!

It's certainly a card I will consider now, even though I did say I was probably going for the EVGA GTX 1080 Hybrid, I'm really not so sure anymore. Granted a hybrid version of the Strix would have been lovely, but in the end water cooling is just a luxury thing and it's something I can always consider adding later on with an EK block and Predator AIO to keep things simple.Quote

AngryGoldfish
I personally prefer the look of the previous Strix, but the fact that this is truly RGB makes it a lot more enticing. I'm looking forward to seeing what ASUS do with AMD Vega in this Strix DC3 version. That should be a lovely update.Quote

sonicpete
Great review TTL. You put in a serious amount of work in your reviews. I must admit I was hoping for greater overclocking headroom. We might be seeing the ceiling on the GTX 1080 cards already.Quote

Kushiro
Was there ever a noise section?

All in all it was very underwhelming for me personally. Expected a lot more from the shrink..Quote
Reply