No you're not getting confused. Yes this is just a review of the new Matrix card from ASUS in single card and SLI setups. We know there are four cards at the top of the page and so, if you're familiar with our exploits, this rightly should be a Overkill3D review. However, having procured enough cards to buy a small Caribbean island we discovered that the new cooler ASUS have installed on their latest Matrix offering isn't two slots wide but two and a half. It doesn't take a genius to work out that there isn't a motherboard with four PCI Express slots, all of them three slots apart. So we're stuck doing just an SLI review. We know, it's a hard job but someone has to do it.

The second thing that can't have escaped your attention is the rather obvious orange hue to the cards. The ROG brand has finally, after what feels like forever, dispensed with the red and black that has become commonplace and moved to black and orange which, we're sure you'll agree, looks amazing. We'll look at them closer on the next page.

Beyond the width and colour changes the Matrix is everything you would expect to find from the premium model in the ROG range. We have cherry-picked GPUs ensuring the very highest performance and overclocking potential. Fourteen phase Super Alloy power only adds to the overclocking capabilities which are backed up by the DirectCU II cooler and some wing-blade fans.

Sometimes we need a word that means stock but isn't. It's why we use 'out of the box' so often. To say a Matrix has some stock speeds is underselling the blistering factory overclock. It's already beyond nearly anything else on the market and that's before the nVidia GPU Boost 2.0 technology has got to work. Or we've fiddled with the ASUS GPU Tweak II software. 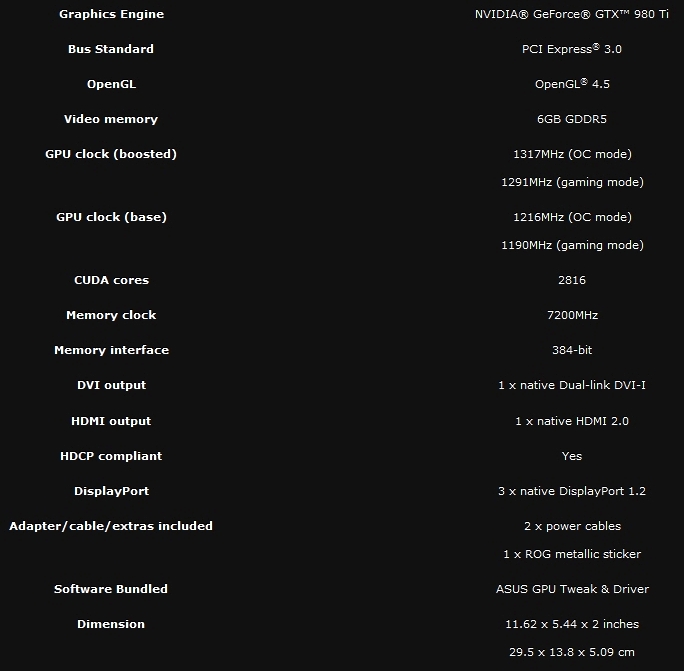 Wraith
Nicely done good sir, and still with the uncontrollable LED Asus (tut tut, please bring in this option) as for the colour I quite actually like the bronze-ish theme although I'd be more impressed if they were to create the mid - high end cards with a neutral base colour scheme and maybe supply an accent decal kit, food for thought ASUS!?!

sure is an impressive card and those clocks with GPUBoost 2 are incredible, great work on another game changer Asus, maybe work on the name though I'm not sure it's long enough.Quote

Thunder-74
hi, great review!! thank you so much
Can you post the bios of the Matrix?
I would compare with a STRIX's bios
thanks anywayQuote

tinytomlogan
Quote:
They were out of the system and back in the box on Monday dude sadlyQuote

Thunder-74
Quote:
Don't warry, there is no problem

JR23
I can't figure out what is happening with the graphs anymore. Are the highlighted scores not overclocked? If it was overclocked would it wipe the floor with the Classified and the Lightning? (finally got to that part of the review, I guess still is it just a good factory OC or exceptional card as well)

Very lazy way of adding some meat to the cooler there. Lost my mind at the cough