When the GTX 1080 Ti Founders Edition arrived on our doorstep we had both a frisson of excitement as well as a little bit of trepidation. After all, the GTX 1080 was hardly a slouch and we were uncertain as to how much better the Ti version could be in comparison to its forebear. But we were also excited because we always get the buzz when something new appears. This isn't a job you could do if you didn't love it, and as we so often say we're enthusiasts first and foremost here in the OC3D basement.

But as good as the nVidia Founders Edition is, there is no doubt that what really shifts the units, what really gets the blood racing, is the partner cards. The Founders Edition cooler is way better than early reference coolers, but there is a reason that nobody uses that style of fan on the heavy hitters. So you can imagine how thrilled we were when the latest parcel from ASUS arrived with the Strix GTX 1080 Ti OC within its cardboard confines.

Strix is the brand that ASUS introduced a short time ago but has, thanks to some clever technologies and fantastic designs, felt like it has been around forever. It's the product range for the gamers, with all the fancy lighting and doohickeys that appeal to the masses, ourselves included.

As you would expect from a partner card, and particularly one with the OC suffix, there are a few things that differentiate the Strix from the Founders Edition. Firstly the GPU Boost has seen a leap up from 1582 MHz to 1708 MHz. Secondly the base clock has also seen a hike up by 114 Mhz to a loft 1594 MHz when compared to the nVidia card. It's not just in the speed department that the ASUS Strix diverges from the nVidia Founders Edition though. Whereas the FE did away with the DVI to leave one HDMI and three DisplayPort adaptors, the ASUS Strix OC goes with a DVI-D, two HDMIs and a pair of DisplayPort connectors. Lastly all this power requires a smoother power delivery, and so the power connectors have moved up one from 6+8 on the nVidia to 8+8 here.

Let's find out what else it does. 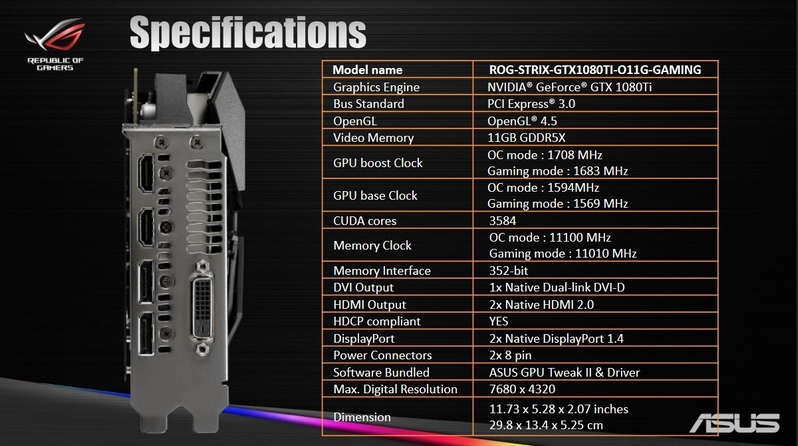 Dicehunter
Damn, Now that is a thick card !Quote

AlienALX
Pure awesomeness. That thing is a work of art.Quote

Get ready to pay an extra $50-100 on this, Also really dumb move IMO bye leaving the DVI port on this GPU, DVI needs to die on these higher end cards.

I would still buy the EVGA over this HahahaQuote

jimma47
Quote:
EVGA will most likely cost the same and if you look at the pics from the source for the https://www.overclock3d.net/news/gpu...80_ti_models/1 article they have also included a DVI port on the 1080Ti's
"Dumb" move EVGA?

Doomslayer
Quote:
Yep dumb move bye EVGA cause Nvidia had the right idea bye not having it on there and before anyone says why i know the reason why they did it.

IMO no high end GPU should have DVI.