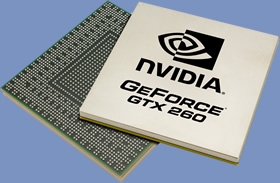 Back in the middle of June, NVIDIA released their highly anticipated GTX200 series GPU's. With a 65nm manufacture process and a whopping 1.4 billion transistor count, the flagship GTX280, as reviewed by Overclock3D, was without doubt one of the most technically advanced GPU's we'd seen in quite some time. However, despite the rather large jump in performance from the previous generation 8800GTX /9800GTX cards, it still didn't quite have enough grunt to take on the dual-GPU monster known as the 9800GX2. This, combined with the rather eye watering £420 price tag attached to the GTX280, hasn't given people much incentive to upgrade.
At the same time, one card which didn't receive quite so much attention as the GTX280 was the GTX260. Essentially a cut-down version of the 280 aimed at the enthusiast not willing to re-mortgage their home or sell several vital organs in order to increase their framerate, the GTX260 was designed as a preemptive strike to the more affordable next generation GPU's from AMD.

With a slightly smaller frame buffer (896mb vs 1024mb), slower core (575mhz vs 602mhz), slower memory (2.0GHz vs 2.2GHz), lower shader unit count (192 vs 240) and a slower shader clock (1250MHz vs 1300MHz), the GTX260 does sound slightly crippled in comparison to its bigger brother. However, with a RRP almost £100 less than the GTX280, the 260 is a prime candidate for NVIDIA AIB's who want to offer their end users premium performance at a reasonable price point by means of overclocking. ASUS are one of these AIB's and today we'll be taking a look at their heavily overclocked GTX260 "TOP" edition card.
Specifications
Keeping in mind the aforementioned figures, we can see from the table on the left that ASUS have performed some serious overclocking of their GTX260 "TOP" card. Firstly, the core clock speed has been increased by a very decent 75mhz, taking it higher than the stock clock for the GTX280. The same can also be said for the shader and memory clocks, with each once again being raised above that of the GTX280.
Obviously there are certain hardware aspects of the cards that ASUS cannot change, such as the Memory bus and number of shader units, so it will certainly be interesting to see how these hold back the card when placed head-to-head with a GTX280.
However, before we get down to the nittly gritty, let's take a look at the ASUS ENGTX260 in all its glory...
«Prev 1 2 3 4 5 6 7 8 Next»

JN
Quote:
Yeah it still rules the roost. Not sure if you've seen recently though but they are dropping off retailers sites like dead flies.Quote

Mr. Smith
Quote:
Really? Not fussed, guess my resale value will be 1/4 of what I paid come '09 lol. If you hook me up with that 790 I might sli some for the craic... No. Resist. Well, for the right price, course I'd need a new psu too

Oh, nice to the point review!

Edit: Actually - I'm going to have to call you on the conclusion

Now that just ain't true is it padre? GX2 is king

GX2 has been wiped off the face of the earth dude

Mr. Smith
Quote:
Well, whatever. My Dad would batter your Dad so stfu nublet lmfao.

Look, you can't argue with your pretty graphs can you? GX2 outperforms the 280. I believe the word you are looking for is pwnt.Quote
Reply