To ensure that all reviews on Overclock3D are fair, consistent and unbiased, a standard set of hardware and software is used whenever possible during the comparative testing of two or more products. The configurations used in this review can be seen below:

CPU: Intel Nehalem i7 920 Skt1366 2.66GHz
Motherboard: Asus P6T Deluxe 'OC Palm'
Memory: 3x2GB Corsair Dominator DDR3 1600mhz @ 8-8-8-24
HD : Hitachi Deskstar 7k160 7200rpm 80GB
GPU: ATI 4850x2 / Nvidia GTX280 / Nvidia GTX285
Graphics Drivers: Cat 4.12 / GeForce 181.4
PSU: Gigabyte ODIN 1200w
During the testing of the setups above, special care was taken to ensure that the BIOS settings used matched whenever possible. A fresh install of Windows Vista was also used before the benchmarking began, with a full defrag of the hard drive once all the drivers and software were installed, preventing any possible performance issues due to leftover drivers from the previous motherboard installations. For the 3DMark and gaming tests a single card configuration was used.

In contrast to what we initially assumed, power consumption is ever so slightly up on the GTX280 according to our power monitor. I swapped cards over numerous times to check and it showed the same readings every time. Conclusive but disappointing. I felt a little like Hudson from Aliens when the editor asked if I'm reading it right. 'I'm reading it right man look!' came my reply.

Temperatures were taken at the factory clocked speed during idle in windows and after 10 minutes of running Furmark with settings maxed out (2560x1600 8xMSAA). Ambient temperatures were taken with a household thermometer. As we use an open test bench setup consideration should be given to the fact that the temperatures would likely increase further in a closed case environment.

Again we were wrong regarding temperature assumption as the temperatures were slightly higher than the standard GTX. Given that the clockspeeds are increased and now we know the power consumption has not decreased this does not come as so much of a surprise.
Overclocking

For our overclocking tests I used Rivatuner which worked perfectly with our setup. More than can be said for the latest version of nTune which resulted in BSOD when we tried to run it. To test stability I ran 3D Mark 06 and a few runs of Crysisbench. 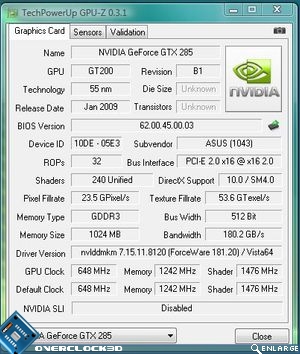 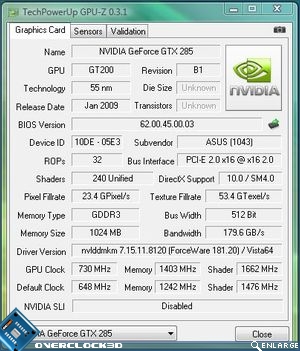 Sure it uses a little more power and runs slightly hotter but it overclocks like a dream. Ever so slightly more than our test GTX280 which itself is a great clocker. Running at these clocks again did not cause the fan to spin up much higher than it did while running at stock speed which is testament to the excellent cooling offered by Nvidia.
Let's move on to our suite of benchmarks where we pitch it up against the ATI 4850x2 and the GTX280...
«Prev 1 2 3 4 5 6 7 Next»

VonBlade
Hmm. Well that was disappointing. Considering the 280s recently had a much needed price cut in anticipation of this card I was hoping it would really blow my socks off. However my feet remain very much covered by the cotton, especially as the price is back to where it was.

I know that the Nvidia single-GPU solution is flipping amazing, but at these price-points it's hard not to appreciate ATIs take on the situation where Crossfire 4850s still rule, and are cheaper too.

Maybe Physx will eventually overtake Havok and so be useful in something other than synthetics, but it isn't looking likely.

Thanks for the review. Glad removing the cooler didn't cause you to sweat too much

Luigi
I feel the same as vonblade... I was hoping the card would run a lot cooler and be more reasonably priced..

FarFarAway
Great review as usual Rich. Looks a nice card, but why buy that when the 4870 X2 beats the hell outta it in most games and the 280 is good vfm

Rastalovich
Nice review. I'd expect a £40 massage within a number of weeks on the existing prices.

If the card comes with 18x.xx drivers, I'd think the former. It would be odd for them to be on the same level as the 280 tho. I kinda expected a 195.xx beta set to be on the cd/dvd tbh.

This is with the i7 at stock isn't it ?Quote