Today, we will be taking a look at the 9800GT from Asus. The 9800GT, on the surface at least, appears to be a clone of the overclockers favourite from the previous generation, the 8800GT.  You would therefore be forgiven in believing that NVidia have done nothing, other than to change the marketing of the 8800GT to a 9800GT. NVidia it seems though, have kept very quiet about this card and the 9600GSO. Instead, the green camp have kept silent over its release, letting the cards do all the talking while they sit back and liquidate the remaining 8800GT 65nm cores.

So what does this mean for the consumer? Well, confusion for a start. Adding yet another card to the NVidia line-up serves only to confuse matters further than it already is. Especially when you consider that when stripped down to the bone, the 9800GT is simply a re badged 8800GT. There are a few added extras though such as Pure Video and Hybrid Power compatibility, should you have an NVidia based chipset supporting those features. To their credit Asus have not just sat back and released a reference design, but they have included a blue PCB and a 'Glaciator'  heatsink which is much the same as the one found on the Asus EAH4850 1GB version we reviewed earlier.

Let's take a look at the specifications: 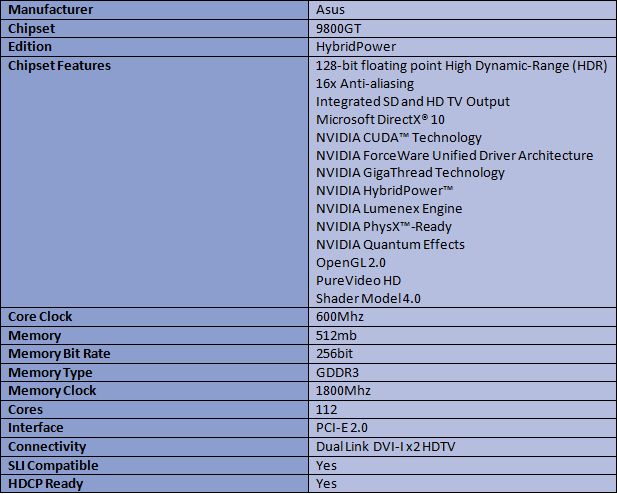 As you can see, the EN9800GT is startlingly similar in design to the 8800GT. In fact, it's almost an exact clone bar the chipset features.

Let's take a look at the card itself which includes the 'Glaciator' cooler. A cooler which Asus claims to allow a 7c temperature drop on the reference 9800GT. Theoretically, the Glaciator should allow for higher overclocks.

Rastalovich
Good review. It does indeed look like a 8800GT with a gpu switch over. However I would draw exception to the comparison of it with a 4850. In my mind, the 4850 is to compete with the likes of the 260 from an nVidia pov, hence u can use the comment of "so last year" cos, well, it is. Immediately seeing the 4850 being held against it, I was quite supprized that it held up as close as it did in some respects. It`s counterpart, the 3850 (imo) may well have produced a different picture. Likewize the 260/4850. It`s a tough call cos on the one hand a company is producing a range whereas the other is introduce 2, mainly with slight manufacturing differences.

They are however closer matched cost per frame than the other variations may be, which is where u probably could consider them to be competitors for that region.

The look of this ASUS range of cooling is growing on me. I did think it looked fugly when I seen it first, and don`t have a particular liking of that direction of cooler on a gfxcard - even tho it is a solid method, I`d prefer to blow across and hopefully out of the case rather than swirling around inside hoping for a good exhaust fan. It`s hard to have that blowing across method without a dual slot approach tho.

Diablo
I think the 4850 is designed to compete with the 9800GTX+ which it matches more closely. The 1GB 4850 is way above this price point. I agree with Rast, the cooling should be across and out of the case. I think the card is for those who want more than the 9600GT without stepping up £50 to the 9800GTX range. It also offers those with more sense to look for an 8800GT with almost all of the features (oh no I lose hybrid SLI, that I don't have support for) for a massively reduced price.

A really good review as ever guys.Quote

w3bbo
The 9800GT is perhaps out there on its own with regard to comparisons but comparing it to say a 9600GT or a 9800GTX would be quite predictable in its outcome. You could say that the outcome in the 9800GT vs 4850 was predictable but they are 2 cards from different competitors (NVidia vs ATI) while using the same manufacturer (Asus). I attempted to emphasize more towards the cost per frame, which the 9800gt dosn't fair too badly to say it is based on last years tech, it's just the 4850 is such a damn good card.

It is very difficult to say which card is competeting against which.

or should it be:

Obviously price also needs to be taken into account which makes comparisons even more difficult - do we compare on price, performance, or price per frame.

Difficult one I'm sure you can imagine, especially when cards are released with no specific entry point in the market.

Thx for the constructive comments guys.Quote

Diablo
Its a good review, I reckon its hard to know what Nvidia are doing with the 9800GT in terms of competition. On the one hand, the 4850 beats it hands down so you should go for that, but the price is higher, and if price is of on object, why not go the whole hog and buy a tri sli 280GTX?

I think the 9800GT is great if you are looking for a GFX below £100, and probably below £90 in a couple of weeks, as it obviously out performs all but the most heavily overclocked 9600GTs.

At the price point I would go for it, but for £20 more I would go for the 4850. It depends on what your maximum budget is and where the fanboy in you lives. Camp red or green people?Quote

I haven`t seen a GTX200 equiv of a "general purpose multimedia emphasis" card, like the 9400/9500 would be - perhaps they wont bother.

Costing, tbh, I don`t look at in regards to them - but really I should. But imo, there are 3 camps, those who want the best card regardless of the cost (looking at the tech 1st), those on a budget (they have £100/£200 - what`s the best card they can get for it), and those who don`t mind x2/xFire/SLI/etc.

Imo also, all 3 of those camps are currently being satisfied from both ATI & nVidia. (cept fanbois ofc