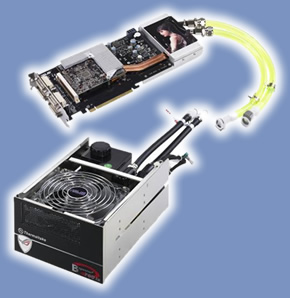 Just over a month ago pictures of Asus' concept card, the "Trinity" started surfacing around the internet. With only 10 put into production, select few media publications have been given the honor of  seeing one in the flesh. However, yesterday ASUS were kind enough to make their way down to Overclock3D HQ with the card for a quick benchmarking session coupled with a nice cuppa tea!
For those of us who haven't been following the coverage of the Trinity, the card is essentially three RV670PRO (3850) Notebook GPU's slapped on to a rather large PCB. The card also comes compete with a whopping 1.5GB of GDDR3 and four DVI ports. ASUS have stressed that this card will never, ever, ever, ever go into production and for that reason, the card should only be taken at face value for it's technological merit rather than compared to any other graphics cards currently on the market.
To be honest, this is quite a relief as the card is mammoth in size (comparable to the Sapphire X1950 Pro Dual "Concept" card) and proved totally impossible to fit in the Antec Nine Hundred encased test system we'd set up especially.
Below are some extracts from ASUS' recent PR release about the card:

Unparalleled Performance with Just One Card
As the world’s first onboard triple GPU solution, the ASUS EAH3850 TRINITY/3DHTI/1.5G is able to elevate 3DMark06 scores from 4880 to 11662 – an astonishing 139% speed improvement when compared to the single-GPU solutions *. Gamers can now truly feel the exhilarating rush of extreme gaming performance only with the ASUS EAH3850 TRINITY.
Exclusively Designed Hardware Features
The EAH3850 TRINITY comes with the MXM module design that allows users to obtain the flexibility to upgrade the MXM VGA module in regards to GPU and memory size with lower costs. The EAH3850 TRINITY also utilizes a specially designed water cooling solution that effectively dissipates heat away from the three GPUs through heatpipes that are specially connected to the main board of the graphics card instead of the GPUs. Due to the fact that the water cooling solution works exceptionally well even with upgraded GPU and memory, the hassles of displacing the thermal module when upgrading the MXM VGA module is avoided for minimized upgrading costs. On top of all this, the EAH3850 TRINITY is equipped with two extra DVI outputs for a maximum of four-display video outputs.
Probably the most exciting feature of the Trinity aside from its Thermaltake liquid cooling solution *ahem* is the MXM module design. This would essentially allow users to upgrade the GPU and Memory installed on the graphics card without needing to purchase an entirely new card. Obviously this has several flaws in that the most expensive parts of a graphics card are indeed the GPU and Memory, so very little savings would be had by upgrading these components singularly rather than purchasing an entirely new graphics card. Obviously driver support could be a royal PITA too. However, as we're looking at an engineering sample here, all of what we've just said is pretty much irrelevant.
«Prev 1 2 3 4 Next»

Not a bad card either.. isn't coming to shops though is it?Quote

Keep seeing all these new dual/triple GPU graphics cards, but not heard much more about the micro stuttering issue that was posted in feb.

Before buying any SLI/Crossfire or dual/triple GPU I'd be interested to know if this issue exists. I am guessing it does and manufacturers are hoping the issue will not become common knowledge?

Lol - my thoughts exactly, what were asus thinking.:stickpokeQuote