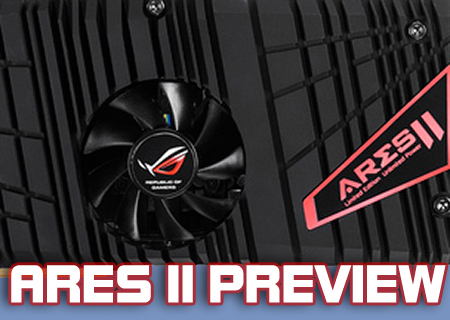 Regular readers will remember the original Ares, a monster of a card with two fully functioning Radeons at the heart of it. Having moved to the Mars II a while ago (the Mars being the dual-GPU nVidia cards and the Ares being the AMD variant) it's about time that a new Ares graced our pages. That's exactly what we have with a sneak preview of the Ares II.

By far the most obvious change is the move from a large hunk of copper and a big fan to a self-contained water-cooled system. Anyone who remembers the PNY GTX580 will know that this has the potential to allow for some serious overclocking at very cool temperatures. This is especially important when there is so much raw horsepower beneath the hood. 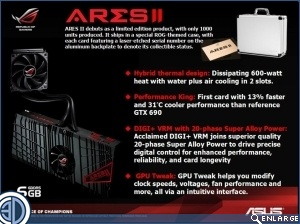 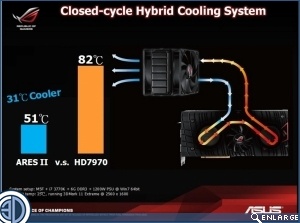 We all know how much manufacturers love to tell us how great their new product is, but if the Ares II is capable of out-performing the GTX690 by 13% then it's already got our attention, and if it even gets close to those numbers we're pretty sure we'll all start saving.

The liquid cooling certainly needs to be flexible, especially with the amount of things demanding the single exhaust port in our cases. Hopefully the LED colour isn't reliant upon the cards status and can be customised. 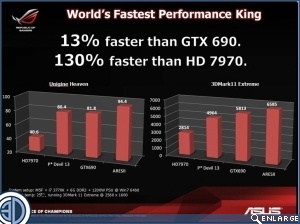 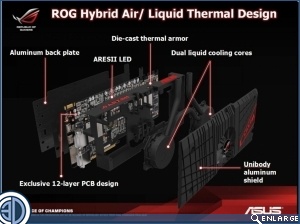 There aren't many things you can do with a card once you've removed the ability to create a fancy cooler, but we think the Ares II has got a nice organic look to it. It's like a surrealist Dairy Milk. 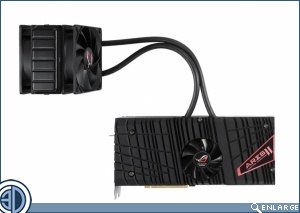 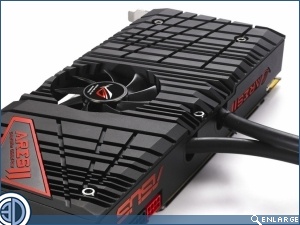 We're starting to reach the limits of how much can be crammed onto a single PCB, and with two full-on Tahiti cores and enough GDDR5 to keep even the most hungry game running smoothly. Similarly to how the LED and cooler have the potential to be either awesome or very disappointing, it's strange to see that ASUS have chosen to remove the HDMI port entirely, and leave us with just two DVIs and four DisplayPort connections. 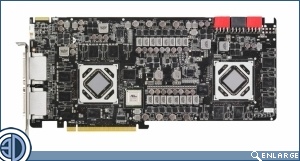 So we'll spend the next couple of weeks wringing the neck of this behemoth, and check back on the 28th for the full review. In the meantime, let us know what you think in the OC3D Forums.

madness777
Would anyone even consider buying this? Also, the video is flickering Tom! Artifacts, I dunno how to say it, but it's flickering. xDQuote

wassupdoc
Waaaaaay to expensive, just buy 2 7970 GHz editions and be done with it IMOQuote

jamesriley94
Quote:
Considering you can get the same thing without a normal cooler for £500 cheaper, I don't see many buying it. But the Ares and Mars cards have always been about making rarer, prestige cards. Still can't see anyone buying one though...

gamingevolved
you got to show the cooler tom!

Ofan
Isn't that like saying why would anyone buy a superbike when they can get a little 125 to get them down the shops, or a Ferrari when they can have a volvo? It's money......you can't take it with you can you