Oxide Games were one of the first developers to support the new generation of Graphical APIs, supporting AMD's Mantle API before DirectX 12 and the Vulkan API were even announced.

The new Nitrous Engine engine is designed specifically for use with modern graphical APIs and Oxide Games has been working tirelessly to deliver a game engine that makes the best use of modern technology be it multi-core CPU support and even cross-vendor Multi-GPU support.

Oxide Games are a real collection of Gaming Enthusiasts, working to support all of these new features in order to satisfy their own curiosity while building one of the most Efficient DirectX 11 and now DirectX 12 game engines ever designed.

Noe with DirectX 12 being here Oxide has dropped support for AMD's Mantle API, moving their resources to support both DirectX 12 and now Vulkan, as both of these new APIs support multiple GPU vendors. Oxide say that their time was not wasted on the Mantle API, as the knowledge gained from working with it is one of the reasons that they are one of the leading developers using modern graphical APIs today. 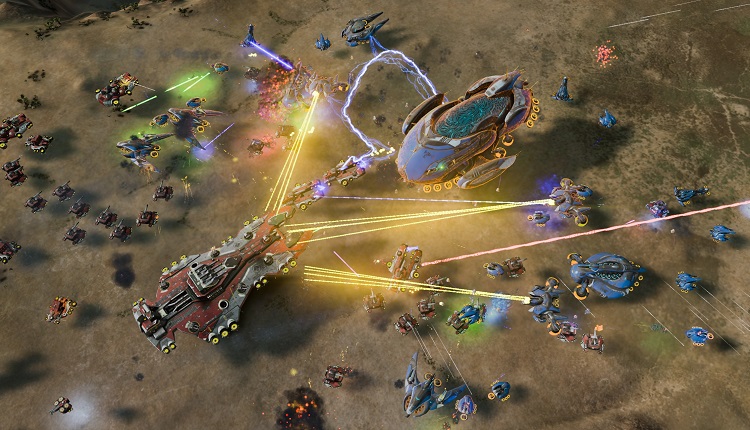 Below is a selection of questions that Oxide Games were able to answer for us regarding the Ashes of the Singularity game and their new benchmarking tool, confirming to us that they do not have a business agreement with either GPU manufacturer to add support for DirectX 12.

Oxide is migrating the effort spent on Mantle to support on the upcoming Vulkan API. We have no solid time-table for Vulkan support at this time, however.

I’ve heard you allow source access to vendors? Is this true?

Yes. Oxide and Stardock want our game to run as fast as possible and with as few issues as possible on everyone’s hardware. Thus, we have an open door policy. For security reasons, we can’t dive into details, but we should be clear that this level of source access is almost unprecedented in the game industry. It is not common industry practice to share source code with IHVs.

Does Oxide/Stardock have some sort of business deal with any IHV with regards to Async Compute? Is Oxide promoting this feature because of some kind of marketing deal?

No. We have no marketing or business agreement to pursue or implement this feature. We pursued the multiple command queues also known as async compute because it is a new capability in D3D12 and Windows 10. That is, we implemented it entirely on our own accord and curiosity. Oxide is committed to exploiting as many capabilities of DX12 as possible.

In the previous benchmark, were you using async compute?

We had very basic support of this feature. During the process of development for Multi-GPU, we realized that some of the lessons learned and code written could be applied to async compute. Thus, this benchmark 2 has a much more advanced implementation of this feature.

Does Oxide optimize specifically for any hardware?

Oxide primarily optimizes at an algorithmic level, not for any specific hardware. We also take care to avoid the proverbial known “glass jaws” which every hardware has. However, we do not write our code or tune for any specific GPU in mind. We find this is simply too time consuming, and we must run on a wide variety of GPUs. We believe our code is very typical of a reasonably optimized PC game.

How much performance should I gains from a second graphics card in my computer?

This depends on your video cards. We expect around 70% scaling if you use two of the same card. However, mixing cards can vary the results. For example, you will never get more than twice the speed of the slowest video card. You would be better off just using the new card alone. If you are mixing and matching cards, we recommend running the benchmark in single GPU mode first, then matching cards which have similar single GPU scores.

Why do multiple GPUs matter?

Multiple GPU configurations are increasingly common amongst gamers. Moreover, it allows users with a reasonably new video card to greatly improve their performance by buying a second card, even if it is a different brand or model and gain performance. This will begin to matter more as gamers begin to migrate to 4K and higher resolution displays.