The release of the GTX 1650 caught us somewhat by surprise. Nvidia already had a full selection of GTX cards in the GTX 10x0 range, and they were recent enough that they hadn't been superseded by any sudden new requirements of games. Okay they have the Turing GPU but shorn of its RT and Tensor cores they are very similar to their Pascal predecessors. The other area that surprised us was the pricing which ended up being nowhere near as aggressive as we expected and put it right into the thick of their fiercest competitors, AMD.

Which segues us neatly into today's review, where we are going to retest the MSI RX570 Armor and see how well it stacks up against the newest addition to the Nvidia range.

AMD have always staked out this affordable end of the market as their own territory and understand the needs of those gamers with limited finances. To this end nearly all their cards come with some free games, and the RX range, even the little RX570, is no exception. Which games you ask? Ubisoft's The Division 2 Gold Edition, and the popular zombie slaughterfest that is World War Z.

Rather than check out how the RX570 and GTX 1650 compare at huge resolutions we are instead focussing purely upon 1080P performance. However, to ensure that all of our comparisons are valid we're still running all of our titles at the maximum possible settings, which lets you see the worst case scenario's. Although modern cards are very good at limiting the performance impact of any antialiasing there is still a fair chunk of frames per second to be gained if you turn down the MSAA from the 8x that we test with to 2x or even off.

Our review model is the 8GB version but it's worth remembering that at 1080 we don't stand a chance of utilising that extra memory and thus the results should be equal to the 4GB model if you're looking at that one. It's worth noting that unlike many of the GTX 1650s we've tested the RX570 has all three display outputs options available, letting you use it regardless of monitor input type. 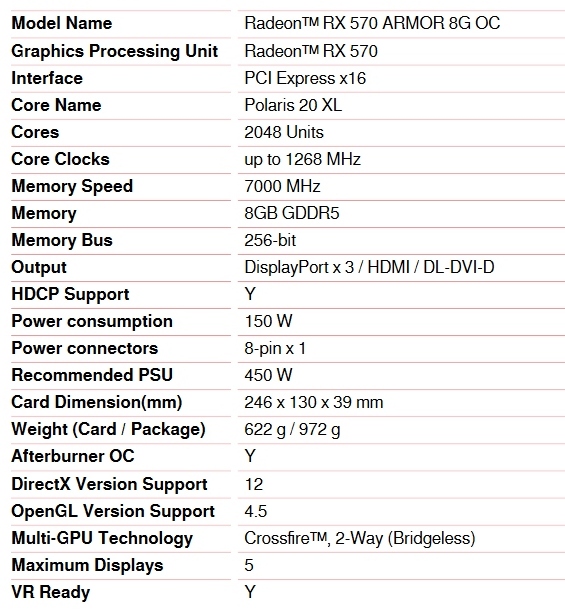