Any time a product starts to reach the end of its existence as the most current model in a manufacturers range, there is usually a "last hurrah" model that takes the best of the product and drips it with bells and whistles. We see this in all sorts of categories. There are GOTY edition versions of games that have all the DLC included. Some high performance cars have limited edition run-outs. It's a popular concept. Most recently we've seen this from the manufacturer of today's review, AMD, with their Ryzen 7 5800X3D, a processor that really upped the ante as far as gaming performance is concerned.

Today we have the first in a run of three new GPUs from AMD under their Radeon range, the Radeon RX 6950 XT. The new three are slightly beefed up versions of the 6x00 cars they replace, and the RX 6950 XT is the follow-on, but not a full sequel, to the Radeon RX 6900 XT. Instead of going down the same route as we see from the Nvidia Ti cards by giving it more cores and faster clock speeds, the RX 6950 XT just has more clock speed. Given how we're all patiently waiting for the 7000 series of cards with hopefully more Ray-Tracing performance - the one weak spot in the current Radeon lineup - it perhaps makes sense for AMD to not go too big on this new card but keep their powder dry for the next installment.

It does, however, mean that if you had a golden cored version of the 6900 XT you might have already got close to the level of performance we expect today. After all, 60 MHz extra boost is hardly going to be a massive game changer, but might smooth out some of the rough edges of the Radeon performance, particularly in more intensive games.

If this introduction sounds a little cautious, it's that we know from our time testing the Ryzen 7 5800X3D how much better it is for games over the standard Ryzen CPUs, and the slight gains shown in the official AMD literature was all tested on that CPU. Thus we're not certain how many extra frames per second the card itself will provide when standing alone from that newest processor. There is only one way to find out.

As you can see below the 6950 has 2GB of GDDR5 and 22 Stream Processors running on... what? Oh this is the other AMD Radeon 6950. You'd think with all the numbers in the world they wouldn't double up. Okay let's try again. 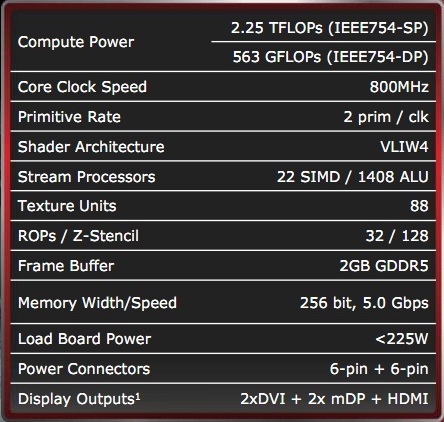 As you can see the RX 6950 XT has near identical specifications to the RX 6900 XT, just with higher clock speeds. Given that this is probably the last hurrah for the 6000 series of graphics cards, then we weren't expecting a massive uptick in shaders or ray-tracing elements but a little more architectural horsepower would've been nice. Perhaps the oddest thing is AMD listing the RX 6950 XT as 1mm2 larger than the RX 6900 XT.

Dicehunter
Very impressive performance especially for the price, If AMD had stronger RT performance, As it is a selling point for me, I'd jump ship in a heartbeat.Quote

AlienALX
I'm more impressed that at least on OCUK it is "only" £1099. Pretty much the same price as the 6900XT. CCL however are clearly on something with their almost £1400 price.

That said after having seen how not very impressive it is VS the also hugely over priced 6800XT I can't say I would ever consider buying one. Not when the 3080 is cheaper than both for the 10gb and the same price as a 6800XT for the 12gb model.

Especially given the review I watched (GN) did not include anything to do with RT, and much more importantly DLSS.Quote

tinytomlogan
Quote:
Depends on the card, you have to compare like for like. Ive seen some models at £1900Quote

KingNosser
Well my 6800xt on a 1700 isn't far behind this maybe once i get this bios and switch in my 5800x I could out perform it, the DXR is ok in all the games I've played obviously behind.

I wouldn't buy any card atm just too close to the next batch.

Can't say i'm impressed by them and either the prices still not close to the original msrp. if they'd come out 6months sooner then maybe if the prices were better but can't see many buying these.

It's stock clearence and a slight bump saying that the midnight black is better suits more builds, but i'll not need a card anytime soon, but my nitro + SE was way overpriced when i got it saw them going for £1500 it was tempting but i do like my card and needed it

give it 6months and the new batch will be out and i'm expecting price rises all round from all sides.

They didn't make the 6850xt as it would have beaten the higher cards with a overclock even i've had 2600mhz without any effort, but i'm even expecting higher on my chip switch

I can't see any huge problems with the Red Devil tbh. They actually dropped the price £20 to compete with Scan too.

Which makes it utterly obvious that some OEMs (like Powecolor) are not taking the pee pee whilst others totally are still scalping.

Sapphire seem to be OK. Theirs are right around RRP atm. It's MSI etc that are the worst. Well, I say that, but Asrock are clearly high. Theirs are by far and away the most expensive Radeons and they don't even look all that great. Funny how they don't send them out for review either.Quote
Reply