It's taken a while but we finally have a new, properly new, AMD GPU to review in the form of the R9 Fury X. We are sure we're not the only ones excited to see if the Fury X matches up to the GTX980Ti in the same way the R9 290X matched the GTX780Ti, and with the theoretical improvements of High Bandwidth Memory we're anxious to throw some benchmarks at the Fury X and see how it performs.

'High Bandwidth Memory', we hear you say, 'what's that?'. Assuming that you have been under a rock, or not paying attention to this very website, HBM is taking the 3D Memory chip idea that we're used to seeing in Solid State Drives, and putting it onto the GPU PCB. By having the smallest possible distance between the physical GPU and the 3D High Bandwidth Memory, and tiny spaces between each bank of DRAM AMD have ended up with an extremely compact, power efficient solution which promises massively improved bandwidth. As the gaming marketplace moves - in the high-end at least - towards demanding resolutions and Virtual Reality, so the need for immense memory bandwidth becomes a pressing one.

Whether you think that VR will revolutionise the industry, or be a flash in the pan akin to 3D displays, there is no doubt that it's coming and so manufacturers have to be ready. We're of the firm opinion that resolution is actually the future but either way the requirement of oodles of bandwidth remains. Probably the most surprising aspect of the HBM solution is the low clockspeed. GDDR5 is normally found running around the 1750MHz mark whereas AMDs HBM only pops up at 500MHz. If the performance is equivalent to GDDR5 then considering the technology is in its infancy it will prove to be the way forwards for everyone. When was the last time AMD changed the rule book?

Away from the unique memory solution the GCN at the heart of the Fury X is similar to most graphics processors. Plenty of Stream Processors, running at a fast pace, form the backbone of the AMD range and the Fury X is no exception. DirectX 12 support ensures that you can take advantage of the latest iteration of Microsofts revolutionary API. Add this to the new Virtual Super Resolution, a similar downscaling idea to the nVidia Dynamic Super Resolution, AMDs own FreeSync technology, and our favourite, Frame Rate Target Control, and there is no doubt that the Fury X has all the bells and whistles. We'll cover FRTC on the power page. 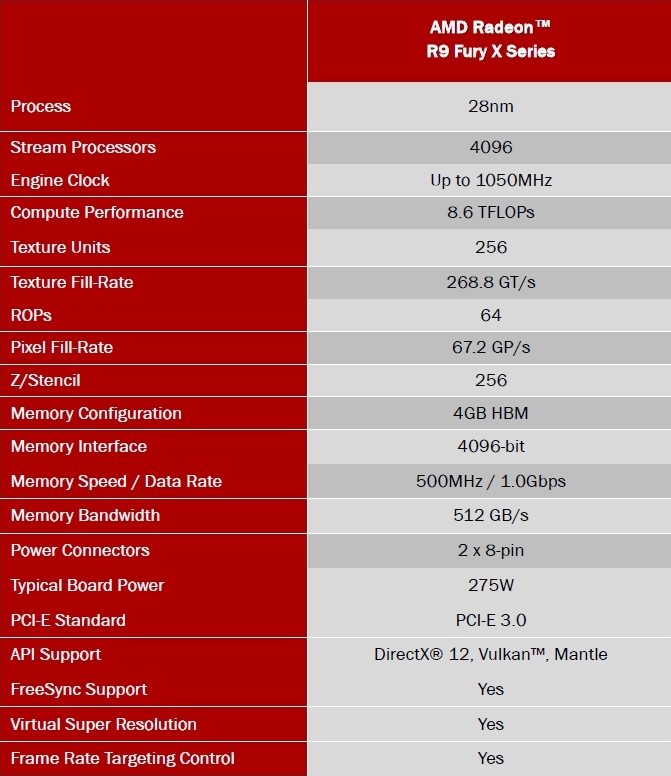